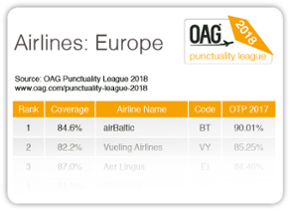 The industry’s most comprehensive annual ranking of on-time performance (OTP) for the world’s airlines and airports is available now. View the results in OAG’s Punctuality League 2018 today.

Highlights from this year’s report.

airBaltic is the most punctual airline in the world, the only airline to achieve more than 90 percentage points. Qatar Airways is the best performing Middle East and Africa airline.

Birmingham Airport holds onto its crown for the airport with the best punctuality of 2017 in the Medium Airports category, with an OTP of 89.92%.

To find out how other airports and airlines ranked, view the full results.