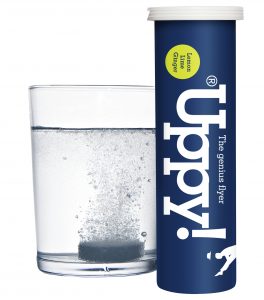 New product to reduce the effects of jet lag; Uppy – The genius flyer.

Now increases the possibility to arrive more refreshed after a long flight. Uppy! – The genius flyer helps the body cope with the dry cabin air. Oral rehydration solution, electrolytes, minerals and vitamins are the content, which will get the traveller to arrive in better condition and recover quicker.

“I’ve flown a lot in my life, gone directly to meetings and come home tired and exhausted,” says Olle Marköö, founder of Uppy! AB. “In the end, I decided to find a solution.”

Olle Marköö began experimenting with the goal to arrive in better condition – in addition to strengthening the immune system. Together with his team, he developed a product that has now evolved into a new business: Uppy! – The genius flyer.

He further explains that the humidity in an aircraft cabin is as low as 10-20 per cent, which corresponds to the humidity in the Sahara. Meanwhile, the pressure in the cabin is corresponding to 2500 meters altitude. This put a strain on the body, and a long flight of four hours or more, will make you lose salts and minerals. The effect is that the passenger feels tired and jet lag effect becomes more apparent.

Uppy is designed in the form of an effervescent tablet, which should be dissolved in a glass of water. To achieve optimum effect, one tablet every three hours.

“Uppy contains important electrolytes that help to restore the body’s fluid balance. Vitamins D and C as well as zinc and selenium maintain a normal functioning immune system, while vitamin B12 and magnesium helps reduce fatigue and exhaustion, “says Tina Almstedt, product developer with a Masters degree in Chemistry from Chalmers.

Uppy! has been evaluated by the crew of a major airline. Per de la Motte, who works as a long haul captain explains:

“Working as a pilot or cabin crew on long-haul flights can be quite tiring and stressful for the body. Like most people, we have up to now most been drinking water and coffee. After continuously having used Uppy, I find that it makes a big difference. Several of my crew is now trying Uppy! with generally very positive feedback. ”

Olle Marköö emphasizes that Uppy been developed in cooperation with nutritional experts, with the vision to help all flying – no matter if the journey is long or short.

“The passenger must simply maintain the sharpness of the day,” concludes Olle Marköö.

Visit us at Stand: 4A40h at the World Travel Catering & Onboard Services EXPO, 4th – 6th April in Germany