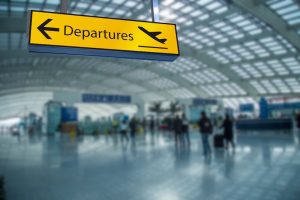 According to the latest data from OAG, the leading provider of digital flight information, London Heathrow is the most internationally connected airport in the world for the second straight year, securing the number one spot in OAG’s Megahubs International Index 2018.

Released today, OAG’s annual report reveals the world’s top 50 most-connected airports for international services, as measured by the highest ratio of scheduled connections to the number of destinations served.

London Heathrow (LHR) scored a Connectivity Index (CI) of 333 – 27 points higher than the second most connected international airport, Chicago O’Hare (ORD; CI: 306). On its busiest day over the past year, there were over 66,000 possible international connections between flights arriving and departing London Heathrow within a six-hour window. British Airways was the dominant carrier at LHR – controlling 52 percent of flights at the airport over the past year.

Ross Baker, Chief Commercial Officer for Heathrow said; “We are delighted to play our part in connecting Britain to global growth, and be recognised as the world’s number 1 Megahub for a second consecutive year. We are continuing to grow connections and this year we celebrated our 10th direct route to China, with four additional Chinese airlines flying from Heathrow.

“Passenger numbers continue to reach new heights and with the green light for expansion this summer, we’re working hard to connect even more corners of the UK to the world and maximise the opportunities that Britain’s new runway will bring.”

“Heathrow is a key connection point for flights all over the world due to its proximity to key EMEA markets and North America,” said John Grant, senior analyst at OAG. “As OAG identified in a recent analysis on Heathrow’s plans to develop a third runway, expansion opportunities will eventually strengthen the airport’s position as the leader in global connectivity by increasing capacity and service to both emerging markets and key European destinations.”

The Asia Pacific region dominated in the Low-Cost International Megahub category, securing ten out of the top 25 positions. The top three spots for low-cost connections stayed the same from 2017 to 2018, with Kuala Lumpur Airport (KUL; CI: 135) ranking first, followed by Jakarta (CGK; CI: 92) and Singapore Changi airport (SIN; CI: 91). While Beijing Airport (PEK: CI: 148) is the largest airport in the world in terms of scheduled airline capacity (seats), the airport finished 32nd in International Connectivity.

“Megahubs are incredibly important for the global travel ecosystem. They increase efficiency, competition and choice, and most importantly, create a boundary-less world for travelers,” added Grant. “Looking ahead, all eyes will be on Beijing’s new Daxing airport. With eight runways serving 100 million passengers annually, we expect it to become one of the busiest and most internationally connected hubs in the world.” 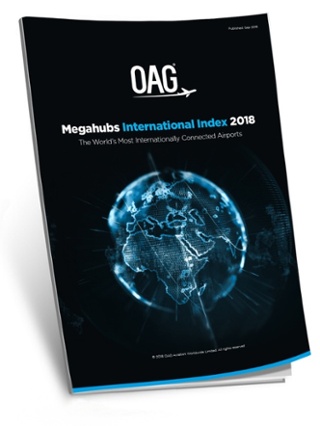 OAG’s Megahubs International Index goes beyond the size of an airport’s route network and measures the number of connections possible within a specific time frame and the relative attractiveness of each airport as a connecting point for scheduled domestic air passengers.

The index harnesses the world’s most comprehensive schedules database to dynamically build connections through a dedicated analytics platform, Connections Analyser, and is further enhanced by OAG’s Minimum Connection Time Exceptions Table. OAG has calculated the total number of all possible connections between inbound and outbound flights within a six-hour window, on the busiest day for global aviation for the 12 months through July 2018.

OAG’s full Megahubs International Index 2018 can be downloaded at: www.oag.com/megahubs