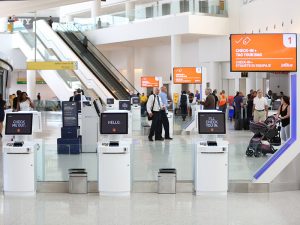 After a successful deployment of the first 60 kiosks at jetBlue’s new flagship terminal at JFK’s Terminal 5, jetBlue and Embross continue the large scale roll out across the carrier’s extensive network.

The aggressive deployment schedule will see the another 100 next generation kiosks deployed across the north eastern United States including Boston and Albany following a successful roll outs in Fort Lauterdale.

The project will see around 400 Embross K Series kiosks deployed across jetBlue terminals driving improved passenger experience and efficiency at the airport.

Embross and it’s class leading K Series kiosk was selected by jetBlue after an extensive and competitive bid process in 2015. The Embross K series developed exclusively to jetBlue’s requirements features high capacity boarding pass and bag tag printing as well as a fully accessible design for the benefit of able and disabled passengers alike.