In a market that’s still under construction today, aviation biofuels are set to develop in the years to come, driven by more coercive public policies. In the long run, i.e. by 2050, their use could reduce the industry’s emissions by 50% vs. 2005. TotalEnergies is thinking ahead of this aviation tipping point and is investing to meet future demand, in line with its Net Zero goal. 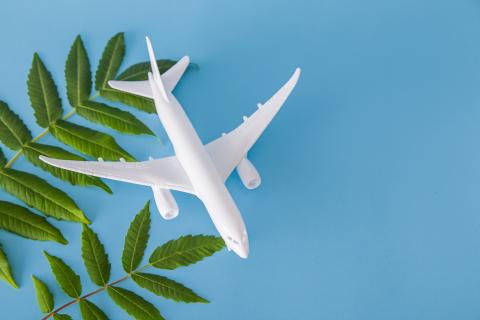 Some of these technologies use biomolecules from agriculture (rapeseed, sunflower, palm oil, etc.), but this practice is not authorised across the globe as it can compete with the food sector – this is the case in France, where supply from the circular economy (e.g. waste treatment) is preferred.

To produce biofuel, the resulting biomolecules are then blended with a predetermined percentage of fossil fuel. Depending on the process, a whole range of standards certify the resulting biojet fuel for use in aircraft. The advantage of SAFs is that they are compatible with today’s infrastructures and engines, unlike other breakthrough technologies such as hydrogen, which requires in-depth changes to these elements – and therefore very significant costs – in addition to upstream engineering. These groundbreaking technologies will be available within the next fifteen years or so: TotalEnergies will be ready and waiting to support its customers.

TotalEnergies entered the aviation biofuels arena as early as 2014 when it developed an R&D partnership with a biomolecule supplier in Brazil. Several demonstration, and even commercial flights have been carried out using the biofuel from this partnership. TotalEnergies is determined to continue helping its customers to reach their energy transition objectives: from 2024, the Group will be able to supply 170,000 tonnes of biofuel a year (HEFA), produced at its Grandpuits refinery currently undergoing reconversion. “This is yet another step towards achieving the objectives of the Paris Agreement: TotalEnergies is one of the players committed to a more sustainable model, both socially and economically as well as environmentally. We are a multi-energy group and we’re adapting our strategy correspondingly“, underlines Antoine Jaeglé, Director of Strategy and Aviation Development at TotalEnergies.

Aircraft biofuel regulations on the horizon

To date, biofuels are more expensive than pure fossil fuels, which is not an incentive in a market mainly driven by prices. For instance, adding 1% SAF on a Paris-New York flight represents a ticket price increase of some $5 per passenger. Governments are becoming increasingly aware of the need to regulate the use of biomolecules in fossil jet fuel to help stakeholders in the aviation industry reduce their carbon footprint. In Norway, for instance, all aviation fuels have had to contain at least 0.5% bio-molecules since January 2020. In Sweden, a 1% threshold will apply as of January 2021. In France, the latest finance legislation has set a rate of 1%, compulsory from January 2022 for all refuelling operations in France. A rate of 2% is expected by 2025. “Admittedly, these figures are still small. But demand has to be created first: once the market has grown, once the volumes intensify, the price of biofuels will fall, thereby triggering a win-win situation.” In fact, TotalEnergies is supporting more and more customers through the energy transition since the airlines have also set foot in carbon-free aviation path. The future still has to be built, but it’s looking good…