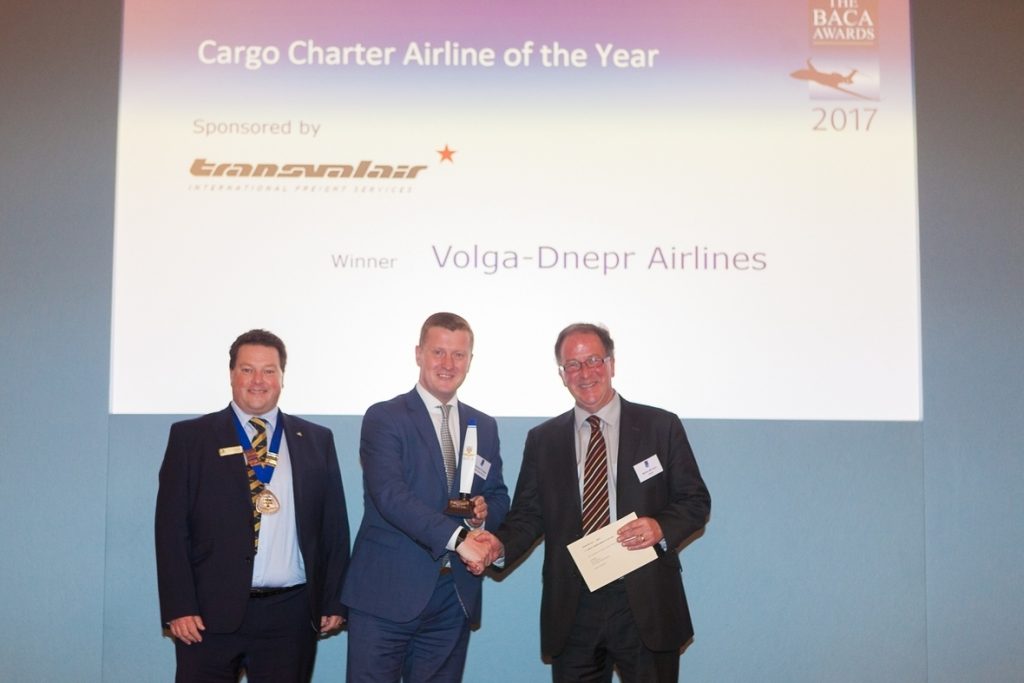 Volga-Dnepr Airlines has won the coveted ‘Cargo Charter Airline of the Year’ award in The BACA Excellence Awards 2017, voted for by members of BACA – the Air Charter Association.

A ‘global voice’ of the air charter industry, BACA was founded in 1949 by members of the Baltic Mercantile and Shipping Exchange to bring to aircraft chartering the same standards of integrity and professionalism for which the Baltic Exchange and the Institute of Chartered Shipbrokers have for so long been known and respected.

Alexander Kraynov, Charter Commercial Director of Volga-Dnepr Airlines, was presented with the trophy on behalf of award sponsor Transvalair at the Association’s annual Autumn Luncheon at the Guildhall in London. The event was attended by hundreds of senior executives from the aviation and air charter sectors, representing some 130 companies.

Commenting on this latest accolade, Alexander Kraynov said: “BACA, the Air Charter Association, is so highly respected because of the quality and calibre of its membership and for its important role in representing the air charter industry. That makes winning this award very special to us because the members who voted for Volga-Dnepr are among the world’s most experienced and knowledgeable air charter professionals. They are clearly best-placed to judge the quality of airline performance.”

Richard Mumford, BACA’s Chairman, said: “Volga-Dnepr was fully deserving of the award for the Best Cargo Charter Airline. Members of BACA report that they consistently deliver a strong and reliable service, handling complex projects with a high degree of professionalism.”

This was the second award presented to Volga-Dnepr Airlines in October for service excellence. It was also voted ‘Charter Operator of the Year’ by a panel of leading air cargo industry executives in the annual Payload Asia Awards 2017, presented in Singapore.

Image: Left to right: Richard Mumford, Chairman of BACA, Alexander Kraynov, and Martin McCann from the charity RedR, who presented the trophy on behalf of the award sponsor, Tony Blackwell from Transvalair