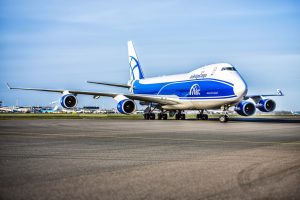 AirBridgeCargo Airlines (ABC), already one of the world’s fastest-growing scheduled cargo airlines, is also developing a successful charter business based on demand for the unique capabilities of its Boeing 747 freighters.

In 2016, the airline saw a 47% YOY increase of charter flights using its 747 freighters. Its latest flights were operated on behalf of DHL Global Forwarding for Evatec, leaders in the production of thin film coating solutions used in Wireless Communications, Advanced Packaging, MEMS, Optoelectronics, High Precision Optics, and Power Devices.

ABC delivered a series of seven-tonne off-size wooden boxes containing machine tools from Europe to Asia Pacific. Its first charter flight for DHL and Evatec operated from Amsterdam to Hong Kong via the airline’s hub in Moscow Sheremetyevo. This was followed two weeks later by a second delivery of cargo originating in Zurich which was flown on a route of Frankfurt-Moscow-Hong Kong.

Overall, AirBridgeCargo transported 80 tonnes of machinery for the mass production of thin film coatings to support Evatec’s growing business at customers in China.

Sergey Lazarev, General Director at ABC, said: “We were chosen for these specific flights due to our reputation for on-time performance as well as our proven expertise in managing safe deliveries of high value production equipment. The loading process was monitored by representatives from Evatec to ensure the integrity of their cargo. This is also a strong reflection of the growing demand we are seeing for Boeing 747F charter services, which we are able to meet due to the continued expansion of our 747 fleet.”