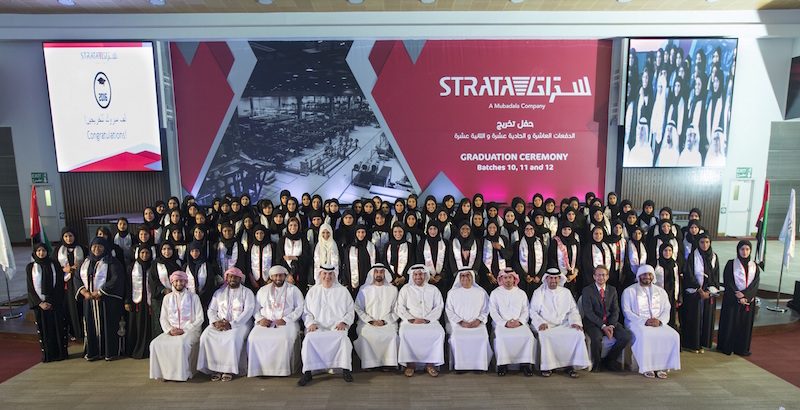 The latest batch of talented graduates from Strata’s Aerostructures Training Program now means that over half of its employees are UAE National talent, supporting the national ambition of building a global aerospace hub in Abu Dhabi’s eastern city of Al Ain.

The milestone was announced during a graduation ceremony held at the UAE University campus in Al Ain for the new graduates, who are set to join Strata’s expanding workforce. Since the launch of the Aerostructures Training Program in 2010, Strata has trained more than 300 Emiratis to join the globally-sought after aerospace workforce.

Badr Al Olama, CEO, Strata, commented: “Today’s announcement is a remarkable achievement that we are all very proud of. On behalf of Strata, I want to congratulate the latest class of graduates for their hard work and commitment in their tireless investment towards building a long-term, prosperous career in the aerospace sector – which is by far one of the most exciting and dynamic industries in the world.”

Al Olama added: “As with all success stories, it begins with an ambitious idea that is nurtured and fostered over time by unwavering commitment and collaboration from many.”

Strata has become a true UAE success story, since its establishment in 2010. Based in the heart of Nibras Al Ain Aerospace Park – the multi-faceted development that supports Abu Dhabi’s vision to grow a globally-competitive aerospace cluster in the Emirate – Strata remains the only company in the Gulf that manufactures aircraft components for the world’s leading aircraft manufacturers, such as Airbus and Boeing.

One of Strata’s highlights has always been the development of Emirati female technicians, who grew a career for themselves through determination and national pride to hone their talents and give back to their country.  At present, Emirati women at Strata account for over half of the 48 Team Leaders and almost half of the Supervisors – compressing the competency and credibility that is built over 10 years globally into less than 5 years in the United Arab Emirates.

Al Olama, continued: “Strata was founded to diversify the economy and transform traditional manufacturing into knowledge-export and innovation through the sustained investment in high tech sectors such as aerospace. This vision set by the leadership was built on the premise of inclusion without distinguishing between men and women, young or old.”