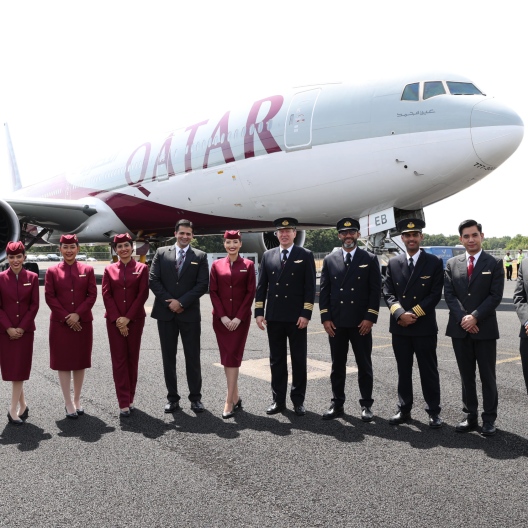 In an unprecedented move, the airline is set to significantly amend operations in November and December from  hub and spoke airline to a predominately point to point carrier to facilitate football fans

Qatar Airways returns to the Farnborough International Airshow after a record-breaking financial year and having expanded its global network to over 150 destinations.

Also appearing at Farnborough Air Show is a Boeing 777-300ER aircraft with a special FIFA World Cup 2022 Livery, in anticipation of the tournament to be hosted in Doha later this year. This aircraft features the industry-leading Qsuite Business Class seat, voted the World’s Best Business Class Seat by Skytrax in 2021.

Qatar Executive, the private jet charter division of Qatar Airways Group, is displaying its luxurious Gulfstream G650ER; one of the most coveted jets among the global travelling elite due to its remarkable range capabilities, industry-leading cabin technology, fuel efficiency and unparalleled passenger comfort. The elegant aircraft can fly at a faster speed for longer distances than any other of its kind, with its incredible 7,500 nautical mile range, and is renowed for its refined cabin interior and stylish touches.

Qatar Airways Group Chief Executive, His Excellency, Mr. Akbar Al Baker, said: “It has been a few years since we have been able to attend such an event, so it is great to return to this year’s Farnborough Air Show in our strongest ever financial position. Our record-breaking financial year with a $1.54 billion profit comes at an important milestone for Qatar Airways, as we celebrate our 25th anniversary and look forward to bringing hundreds of thousands of football fans to Doha for the FIFA World Cup Qatar 2022™.”

As Qatar Airways gears up for the FIFA World Cup Qatar 2022™, the airline faces a unique set of operational challenges due to a significant increase in demand for flights to Doha. This will see Qatar Airways undertake a network adjustment that is unprecedented in the industry, as it will temporarily transition from a global network to a predominately point-to-point service, with its home at Hamad International Airport the gateway to the games.

Qatar Airways returns to Farnborough International Airshow following last month’s publication of its annual report for 2021/22, which showcased the airline’s strongest financial performance ever. Qatar Airways reported 200 per cent above its highest annual historical profit and carried over 18.5 million passengers, an increase of 218 per cent over last year.

Qatar Airways currently flies to more than 150 destinations worldwide, connecting through its Doha hub, Hamad International Airport, voted by Skytrax as the ‘World’s Best Airport’ in 2022 for the second year in succession.