Eminent international women leaders from the aviation industry will converge at the 2nd Women in Aviation General Assembly on May 15th to promote the higher participation of women in the Middle East’s robust aviation sector.

Hosted by Airport Show 2017, the General Assembly and Student Career Orientation Programme is being organised in partnership with Women in Aviation (Middle East Chapter) and will involve participation of aviation experts of international acclaim and over 200 attendees. The forum will help connect government and private companies, which are keen on hiring women, with aspiring professionals in the aviation sector.

Airport Show 2017 is being held under the patronage of His Highness Sheikh Ahmed Bin Saeed Al Maktoum, President of Dubai Civil Aviation Authority, Chairman of Dubai Airports, Chairman and Chief Executive of Emirates Airline and Group from May 15-17, 2017.

With women constituting over 60 per cent of Arab countries’ science, technology, engineering and mathematics graduates (according to UNESCO), the forum is taking active measures to enhance their participation in the Middle East’s robust and rapidly growing aviation sector, which contributes over $157.2 billion to the GDP and generates more than 2.4 million jobs. In Dubai alone, the aviation sector is estimated to contribute 37.5 per cent to its GDP and support over 750,000 jobs by 2020.

Laila Hareb, Assistant Director General – Aviation Strategies and International Affairs at General Civil Aviation Authority (GCAA), said: “Women in the UAE are making their mark across all sectors. In line with the vision of our leaders toward driving women’s participation in the national development of the nation, I would invite women to be a part of this highly important forum and of the aviation sector, particularly to tap into the numerous opportunities offered in the booming aviation sector in the Middle East, which has a very strong growth outlook. Airports across the region are investing to the tune of millions of dollars toward expansion and the region is also set to be the fastest growing region in the world for the airline industry. The region has no shortage of talent and there is a perfect opportunity for the industry to tap into the talent pool and, for those aspiring to be a part of this sector, to avail of the opportunity.”

Mervat Sultan, Co-founder and President, Women in Aviation Middle East, said: “Most roles in aviation are still dominated by men around the world and with the help of conferences such as these, we hope to change this. The region is quickly becoming the global hub for aviation and women will have a huge role to play in this growing sector. The Women In Aviation Middle East Chapter is pleased to support the organisers in highlighting the exciting career opportunities that will open for women across aviation in the region over the next decade and promoting the role of women in the aviation and aerospace industry. We look forward to welcoming many of our colleagues and partners from across the region to the conference in May.”

Mervat added: “Empowering women in highly skilled roles is a major initiative of the governments in the Middle East. We are pleased to announce that Women in Aviation is receiving an equally strong interest from companies in the private sector who are keen on hiring women. Our Middle East chapter is now focussing on spreading awareness about aviation as a career of choice in the region by visiting schools, universities and colleges, when students are seeking the right information and direction to choose the best career for themselves. In addition, we are also helping companies in the aviation sector that are keen on hiring women to reach the right talent. All the efforts are focussed toward attaining the main goal, which is increasing the participation of women in Middle East’s aviation sector.”

The first general assembly of Women in Aviation, held in 2016, was a record success with the major participation from women professionals across the aviation sector such as pilots, engineers, managers and training and recruitment professionals.

Salem Abaid Al Muzaini, CEO, Sky Prime private aviation services, said: “We are proud to be the platinum sponsor of the Women in Aviation General Assembly. Sky Prime is supporting to empower women and enhance their participation in aviation & all sectors.”

The general assembly and career orientation programme will provide the participants an opportunity to get inspired and hear women who are motivating millions with their success in this sector.

Among the sessions will be a special panel on ‘Inspirational Stories’ of the most successful and talented women in aviation around the world who have made it to the top of their organisations, a session exploring the wide spectrum of roles in aviation, as well as a practical guide on how to excel in these roles for aspiring young professionals, a presentation on key developments that will shape the Middle East’s future aviation landscape and the economic stimulus these will create for the region and a panel discussion on preparing the aviation leaders of tomorrow.

Daniyal Qureshi, Group Exhibition Director, Reed Exhibitions Middle East, organisers of Airport Show 2017, said: “Across the GCC, we see exemplary initiatives being taken to encourage the participation of women in aviation, particularly as the region’s aviation sector is amongst the fastest growing in the world. The Middle East’s aviation and aerospace industries will see a huge boom in job opportunities over the next decade and this is the right time to ensure an equal opportunity for women in this sector. In line with our objectives of supporting the sustainable growth of aviation in the region, Airport Show is pleased to host Women in Aviation, which we are sure will create a positive long-term impact on our society.” 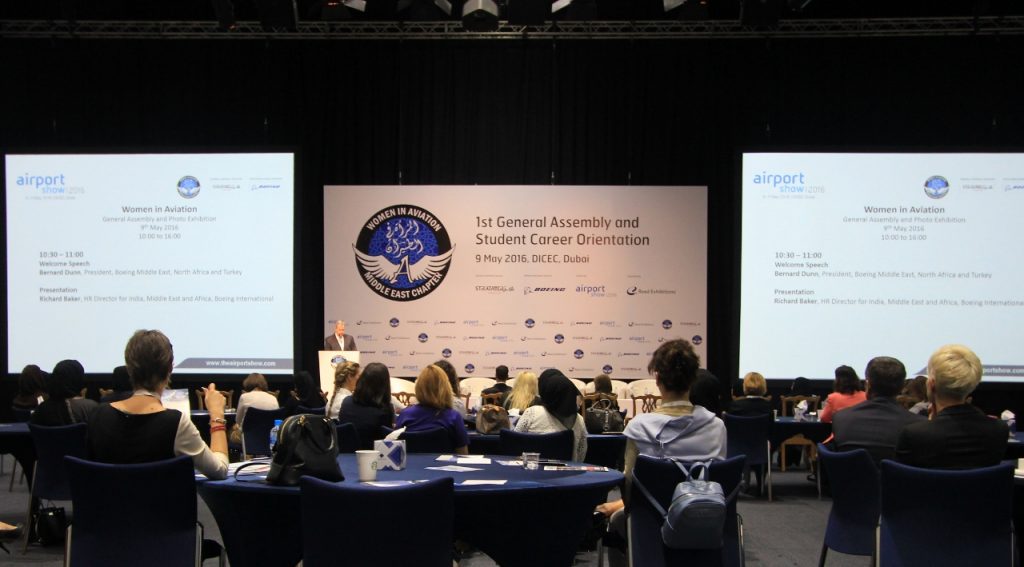