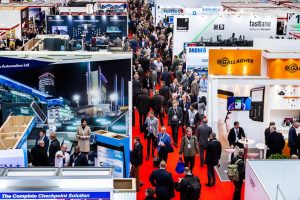 It is always difficult when putting an event together to get the right balance of activity to generate sufficient interest – from a show organisers perspective the business book says do just enough to get the footfall through the door and thereby attract enough exhibitors to make it worthwhile. Well we are the UK Security Expo team and we ripped that book up.

We started early and ran a series of roundtable discussions and spotlight briefings though the year and took the opportunity to identify key issues, engage with organisations, potential exhibitors and potential visitors to see what they wanted; we listened.

It is too easy to concentrate on one or two of those 4 P’s, but unless you bring them all together you are not doing a complete job.  Public, Private, Political, Police and other security services was the backbone running through the UK Security Expo 2017.

However, security is becoming increasingly complex so the 4 P’s are supported by technology, and those technologies are diverse, processes, and those processes have to constantly evolve to meet developing threats or environments such as cyber, and people, and those people need the right skill sets, training, mentoring, connections and platforms for improvement.  Underpinning all of this is working together, not just between organisations nationally but working together internationally and with multinational bodies.

So, did we achieve what we set out to? 10,236 attendees over two days including senior ministers and government officials, with hosted delegations from 57 countries providing 361 delegates and overall there were visitors from 108 countries at the event; this all adds up to say we did and we did it in a spectacular way.

The expo opened with a Safer Cities Briefing that brought 14 people from government departments, politicians, police and representatives of international organisations from 8 different cities from around the world blighted by recent terrorist atrocities together for 2 hours, to examine the lessons learned and discuss cooperative ways forward and best practices. Those 14 included the Mayor of Melbourne in Australia, the Chief of Police from Berlin and the Deputy Mayor from Nice, everyone was a senior operational commander or political lead for countering terrorism. The audience listening to the discussion was over 300 officials strong, with standing room only and another 300 applications to attend had to be refused through lack of space, we did manage to squeeze in 3 members of the House of Lords.

The pace and energy on the exhibition floor was electric, with all conference theatres also packed with standing room only. Robert Doyle AC, Lord Mayor of Melbourne in Australia gave a Keynote at the Global Counter Terror Conference and Professor Errol G. Southers, whose long history included being an FBI Agent, President Obama’s first nominee for Assistant Secretary of the TSA and California Governor Arnold Schwarzenegger’s Deputy Director in the California Office of Homeland Security, also flew in especially to speak at several conferences including Major Events & Stadium Security and Designing Out Terrorism.

Dean Armstrong QC of the London based Elias Partnership and representing Setfords, probably the only QC focused on GDPR and co-author of the first comprehensive textbook on cyber-risk and data protection, gave a real reality check on GDPR, Lieutenant General Andrew Graham CB CBE from Combat Stress represented the official charity and Lord Bernard Hogan-Howe former Commissioner of the Metropolitan Police all spoke.  That is just a flavour of the experience imparting knowledge.

There were events within events, and the Drone Fly Zone proved extremely popular as did the Government Agency and Department Zone, complementing the Government Innovative Research Call reaching out with money to help businesses.  The not for profit TINYg organisation held an incident focused table top exercise that was provided by Ultimate Security; a perfect example of our work with those in the Facilities Management arena and much discussion around public private collaboration was a thread in several conferences.

So, was any real business done at the show? Again, the answer is yes but it is better said by Craig Mason, Manager, Rosehill Security, “Thanks to the team at UK Security Expo, they made the show a pleasure to be a part of. Peter’s team were also instrumental in Rosehill securing two large overseas orders.”  Professor Errol G. Southers also told Philip Ingram that in the past 26 years he had “never come across such an impressive show with so much energy and quality content.”

Was this year’s event a success? Hell yes!  Will next years be bigger and better? You bet!  So, make sure you put 28th and 29th November 2018 in your diaries and watch out for the events that will be run through the year to prepare for it.