More than 900 exhibitors, over 22,000 trade visitors and buyers, and 30-plus national pavilions will make up this year’s exciting event along with 500 hosted VIP buyers.

“This exhibition has become one of the leading F&B events in the region, and embodies the leadership and the support of HH Sheikh Mansour Bin Zayed Al Nahyan Deputy Prime Minister of the UAE, Minister of Presidential Affairs and Chairman of Abu Dhabi Food Control Authority, to adopt a strategic vision aimed at food sustainability and safety.

“Today, the UAE enriches the foundations of excellence and creativity to implement its ambitious plans to achieve optimum levels of well-being and happiness for the community.”

According to research from Economic Intelligent Unit, food imports in the GCC are expected to reach US$53.1 billion in the next four years, furthermore, the World Bank projects the Middle East and North Africa (MENA) region’s food market could exceed US1 trillion by 2030.

“The F&B sector is hugely important to the region and there’s certainly plenty to discuss and debate as we move forward. SIAL provides that perfect platform, with some 22,000 senior decision makers from major food companies, representatives from F&B outlets and hotels, food retailers, Government officials, distributors, importer and exporter exhibitors, and hosted VIP buyers are expected to attend the event,” added Al Qasemi.

A host of exciting events will be welcomed back, while several new initiatives have been added to the three-day showcase, addressing the key issues influencing the multi-billion-dollar F&B industry in the region.

Fadi Saad, Director, SIAL Middle East, said: “Thanks to ADFCA’s commitment, as well as backing from the leaders of the nation, this event continues its remarkable growth and development. We are delighted to play our part in supporting the industry at all levels and look forward to our biggest event yet,”

Mubarak Al Shamsi, Director of Abu Dhabi Convention Bureau at Abu Dhabi Tourism & Cultural Authority, said: “We are pleased to promote SIAL as part of Abu Dhabi Food Festival 2016. Our aim is to provide a unique experience combining cooking and entertainment to an audience of different nationalities and cultures.

“Our participation at this international event firmly positions Abu Dhabi on the global stage with regard to our food and beverage sector as well as promoting the emirate as a leading tourist destination and cultural hub.”

There will be an all-new series of niche conference sessions covering a wealth of high profile topics including ground-breaking and innovative approaches, technologies, ingredients and business models across the entire food supply chain.

Further new additions to this year’s La Cuisine competition, which attracted more than 650 competing chefs last year includes the Alen Thong Golden Coffee Pot Young Chefs Challenge. The challenge has been launched in memory of one of the Emirates Culinary Guild’s founding fathers, and will see nine five-chef international culinary teams take part in the most notable gastronomic contest anywhere in the Middle East for young chefs.

The 35th edition of The Mercurys, the most prestigious award in travel catering, will take place suing SIAL on the 5th December. These sought after accolades will cover the best airline meals, service concept, food products, beverage and equipment all being hotly contested by leaders in this industry

Returning for a second successive year will be the Abu Dhabi Food Security Round Table series, organized in partnership with Food Security Centre – Abu Dhabi (FSCAD), where leading government officials, CEOs and industry experts will discuss and debate ways of ensuring the availability of affordable, sustainable and nutritious food for the region. Over 200 attendees are expected over two days.

Also returning for 2016 will be the World Tour exhibit, with displays by top food journalists from across the globe including editors from publications in Australia, Brazil, China, France, Poland, Russia, Spain, the UK and the US; and the eagerly awaited Regional Barista & Latte Art Championships featuring over 40 entrants. 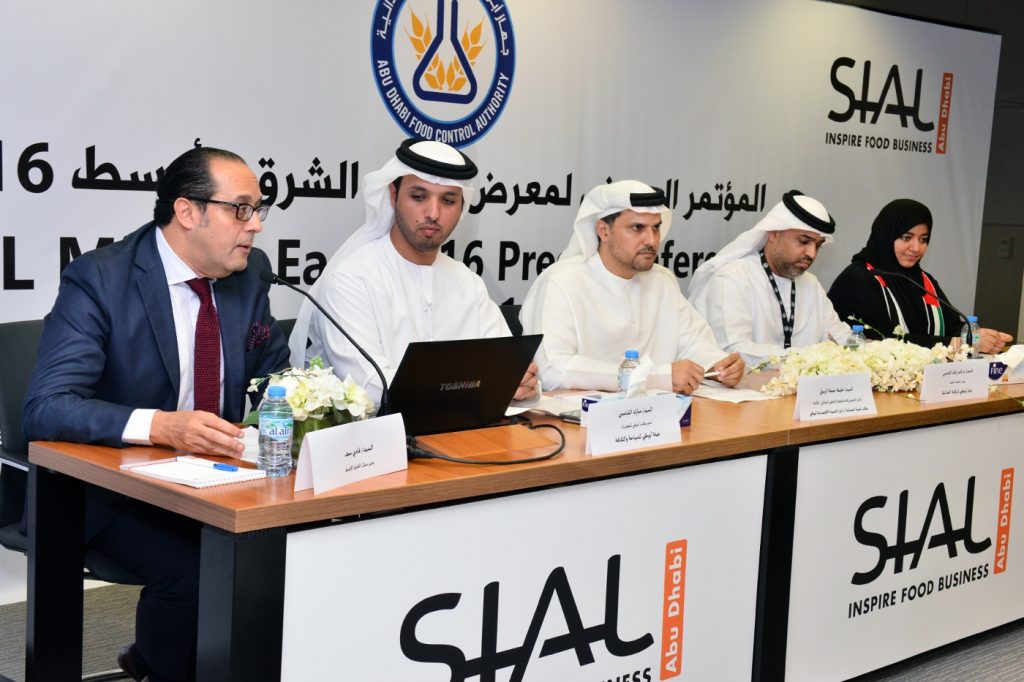