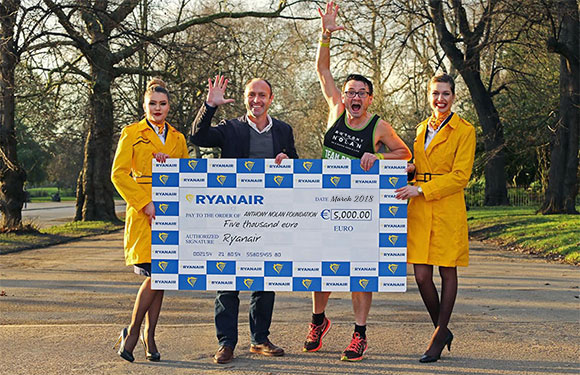 The Always Getting Better Ryanair just got nicer by sponsoring the British-Irish Airports EXPO’s Paul Hogan in this weekend’s Virgin London Marathon with a €5,000 sponsorship. You can also donate directly: uk.virginmoneygiving.com/TeamBron

All proceeds go to the Anthony Nolan bone marrow transplant charity which arranged two transplants for the Hogan’s daughter, Brontë. “Bron” passed away in 2011, aged 12, after a brave five-year struggle with leukaemia. Hogan (56) is aiming for a sub 4-hour this Sunday (versus 3:27 PB).

£10 donated for every FREE delegate registration…

…and £50 donated for every FREE Unsung Hero nomination!

Furthermore, we’ll raise this to £50 for every Unsung Hero Awards nomination received before 30 April. Presented at the Heathrow-hosted British-Irish Airports EXPO at Olympia London on 12 June 2018, the Unsung Hero Awards recognise the airport people who make all the difference.

These awards (and they’re really nice trophies) could be for the people who promptly deliver bags, keep the runways clear of snow, make sure the toilets smell fragrant, or just keep the queues short.

Nominations are now being invited from 50 British and Irish airports (and stakeholders) which will be put to an online poll of the airports community in May (over 4,500 airport staff voted in last year’s awards).

Anyone can nominate a candidate using our simple online nominations form. There is no charge for anything whatsover. Nominations close on 30 April 2018. The champion Unsung Heroes will be selected from a shortlist in a live online poll which will be intensively promoted to the British-Irish airports community in May.