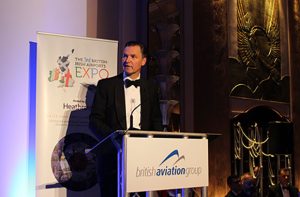 Addressing over 360 guests and representatives of British companies involved in airport development at the annual BAG dinner, the Heathrow CEO, John Holland-Kaye, asserted: “The £16 billion Heathrow Expansion will serve as an exporters shop window for British ingenuity. Expanding Heathrow is a once-in-a-lifetime chance to really boost growth across Britain; in particular we are scouring every corner of the country to embrace Britain’s excellent SMEs.”

As a key plank of this inclusion strategy Holland-Kaye explained that 121 offers had been received from across the UK to host one of four logistics hubs for remote manufacturing and assembly. With the final selection expected in mid-2018: “Heathrow’s logistics hubs are set to revolutionise UK construction – providing pioneering off-site manufacturing to reduce overall cost of expansion, cut local emissions, and create a new industry for the UK.”

Holland-Kaye also took the opportunity of explaining the rationale behind hosting the British-Irish Airports EXPO at Olympia in June 2018: “We look forward to welcoming the British-Irish airports community to London, and to working together to create the vital connectivity Global Britain needs to reach its world markets, and to show the world that Britain is open for business.”