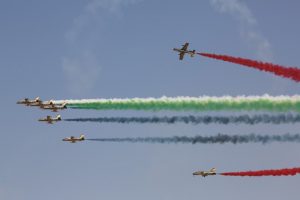 Impressive Aircraft to take to the skies in Dubai

The Dubai Airshow has announced the first round of aircraft expected to demonstrate their abilities in the flying display when the event takes place from 12-16 November at DWC, Dubai Airshow Site.

Aerobatic displays this year will include PLAAF August 1st Air Demonstration Team from China performing in J10As and the Russian Knights in Sukhoi SU30Ms in addition to the UAE’s Al Fursan flying their Aermacchi MB-339NATs.

Of particular interest this year will be the Calidus Bader 250 – making its introduction at the Dubai Airshow 2017, the aircraft is manufactured in the UAE. Also appearing for the first time will be the Sukhoi SU35 while other aircraft flying include the Airbus A350 and a Beriev BE200 ES demonstrating its firefighting ability.

The flying display will also feature helicopters, including the TAI T129 attack helicopter performing for the first time at the Dubai Airshow, plus Motor Sich Mil 2 and Mil 8 models. A large number of military aircraft will also be demonstrating their prowess, with a US Airforce F16, UAE Mirage 2000, French Airforce Dassault Rafale and a Taqnia AN132.

“The flying display at the Dubai Airshow is always a popular feature with exhibitors and visitors alike,” say Michele van Akelijen, Managing Director of show organisers Tarsus F&E LLC FZE Middle East. “2017 will of course be no exception.”

The Dubai Airshow will take place 12-16 November at the DWC, Dubai Airshow Site, with the flying display underway from 2:00pm – 5:00pm each day of the show. Trade visitor tickets are available from dubaiairshow.aero for $76 for the five day event.