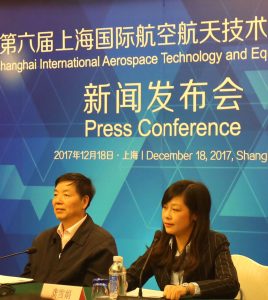 The 6th Shanghai International Aerospace Technology and Equipment Exhibition 2018 (short for AIREXPO SHANGHAI) press conference was held in Shanghai Hengshan Hotel in the afternoon of 18th Dec. Mr. Jin Hongming, the Secretary-General and Researcher of Shanghai Society of Aeronautics, presided over the press conference.

AIREXPO SHANGHAI has been successfully held for five times since it has been established in 2005. This expo attracted thousands of various people and enterprises from nearly forty countries and regions all over the world to participate the expo, including leaders of aviation industry and relevant industries, senior officials in domestic airline companies, government officials, buyers and suppliers. AIREXPO SHANGHAI provides a broad platform for the expansion of the huge market of aviation manufacturing in China. After several years of precipitation and accumulation, AIREXPO SHANGHAI, with the full supporting of many domestic and foreign government organizations, industry associations, exhibitors, professional visitors, media and partners, has become the third largest aerospace event after Airshow China and Aviation Expo China. It is a very instructive source of information for the aviation industry and leading the industry trend. 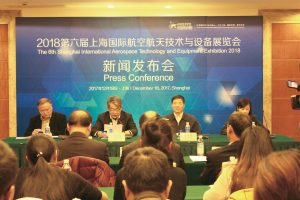 It was reported that AIREXPO SHANGHAI 2018 will be held in National Convention and Exhibition Centre (Shanghai) on May 14-16, 2018, planning total exhibition area of 25,000 square meters. The expo comprehensively involves Aircraft, Aerospace Technology and Equipment, Aviation Engineering and Services, Aircraft Interior and Refurbishment, Air Rescue and Flight Training, Aviation Intelligence and Unmanned Aerial Vehicle, Intelligent Airport Construction and Operation Plate. The expo aims at “With the Core of Developing Shanghai Aviation Industry, Root in Shanghai, Radiate China, Face the World”. During the exhibition, forums like the International Aircraft Engineering Summit, Commercial Aero Engine International Forum, the International Wisdom Airport Construction and Operation Summit, the International Aviation Rescue and Fire Fighting Safety Summit, the International Flight Training Seminar and other activities will be held together with buyer presentation related to aviation manufacturers, aviation engineer and wisdom Airport. These activities will be the highlights of this exhibition. Buyer Presentation takes the form of one-to-one and face-to-face communication between Aviation manufacturers, aeronautical engineering companies, aircraft companies, airport groups and other buyer procurement departments and exhibitors to allow buyers effectively collect samples and information, so as to promote understanding and friendship between the supply and demand.

We are looking forward to meeting you in Shanghai next May in AIREXPO SHANGHAI!