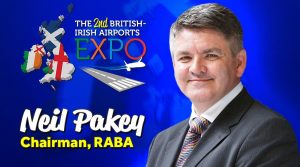 is continuing its valuable alliance with the British-Irish Airports EXPO. It will once again hold the RABA AGM alongside the event but, this year, it will also stage an important conference on operational issues on the EXPO floor itself.

This free-to-attend conference will especially look at the problems and solutions to the disproportionally high cost of regulatory compliance for airports of less than 3 million passengers with case studies from airports, the regulators, and suppliers.

Besides the RABA conference, visitors will have multiple benefits including free access to a trade exhibition of 200 airport suppliers (150 in 2016), superb networking with British and Irish airports big and small (including an evening mid-summer party), while taking advantage of the superb air, rail and road access to the NEC, right next door to the event host, Birmingham Airport.

What does RABA do?