The International Air Transport Association (IATA) announced global passenger traffic results for June showing that demand (measured in total revenue passenger kilometers or RPKs) rose by 7.8% compared to June 2017. This was up from 6.0% year-over-year growth recorded in both May and April. June capacity (available seat kilometers or ASKs) increased by 6.5%, and load factor rose 1.0 percentage point to 82.8%. The first six months of 2018 produced demand growth of 7.0%, a strong performance, but down from 8.3% growth recorded in the first half of 2017.

“The first half of 2018 concluded with another month of above-trend demand growth, which is a good indicator for the peak summer travel season in the northern hemisphere. But the looming prospect of a global trade war is casting a long shadow. Additionally, rising cost inputs—fuel prices have soared by approximately 60% over the past year—are reducing the stimulus of lower fares,” said Alexandre de Juniac, IATA’s Director General and CEO. 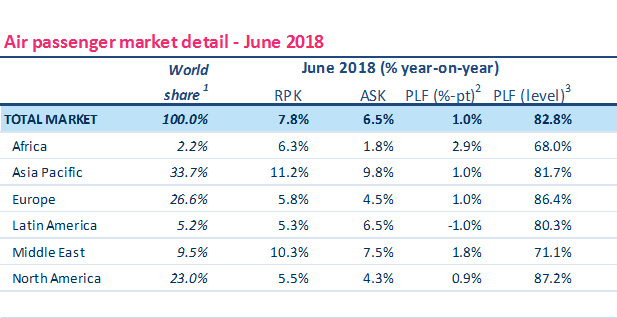 Demand for domestic travel climbed 7.9% in June compared to June 2017, up somewhat from the 6.7% annual growth seen in May. June capacity increased 7.5%, and load factor edged up 0.3 percentage point to 84.5%. Led once again by double-digit gains in India and China, all markets reported demand increases, but with wide variation.