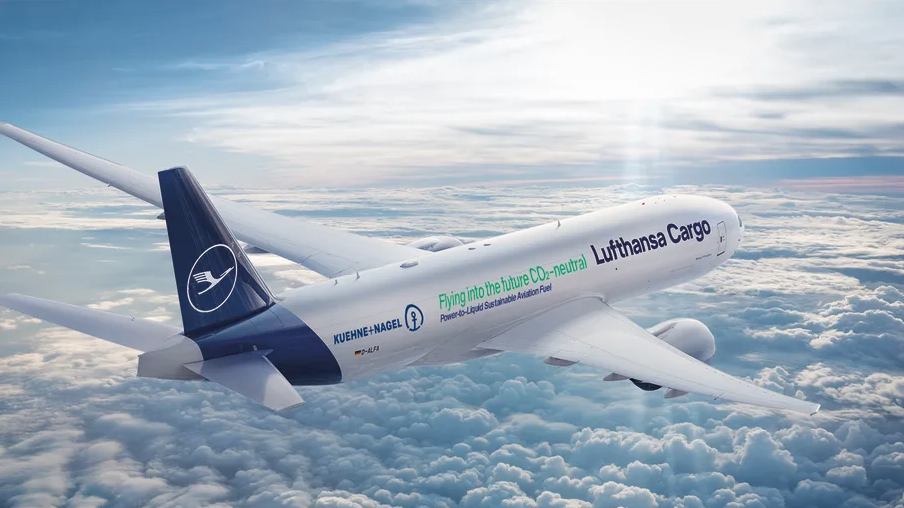 The two companies Kuehne+Nagel and Lufthansa Cargo have agreed on an exclusive partnership for the promotion and use of power-to-liquid aviation fuel. The logistics service providers have jointly committed to supporting the world’s first production site for synthetic crude oil in Werlte/Emsland in Germany by purchasing the equivalent of 20 tonnes, or 25,000 litres, annually. The synthetic fuel based on it is considered to be the fuel of the future, which should further reduce the CO2 footprint of aircraft engines in the future. The production site in Werlte is operated by the NGO atmosfair from Bonn.

“We clearly see the key to a sustainable reduction of our emissions in flight operations in the research and use of synthetic, sustainable aviation fuels. The fact that we are now pioneering power-to-liquid technology together with Kuehne+Nagel makes us particularly proud and shows once again that we are actively tackling our climate protection challenges,” Dorothea von Boxberg, CEO Lufthansa Cargo, explained the strategic background to the partnership with Kuehne+Nagel .

Yngve Ruud, Member of the Management Board of Kuehne+Nagel, responsible for Air Logistics, commented: “Already now, Kuehne+Nagel customers can avoid carbon emissions of their shipments globally with our bio SAF solutions and I am delighted to see that time has come for synthetic SAF as the long‐term solution for aviation. By securing the first power-to-liquid fuel production together with Lufthansa Cargo, we are sending a strong message of commitment and collaboration, inviting our industry colleagues and customers to join us in creating the low-carbon economy of the future already today.”

CO2-neutral fuels or Sustainable Aviation Fuels (SAF) are an essential pillar on the way to CO2-neutral flying. These fuels can be produced in various ways. Until now, Lufthansa Cargo and Kuehne+Nagel have used Sustainable Aviation Fuels of biogenic origin, i.e. synthetic paraffin based on used cooking oils, for example. In the case of synthetic paraffin, which is also known as power-to-liquid fuel, the synthetic crude oil is produced from regeneratively generated electricity, water and CO2. Because of this process, PTL-based aviation fuel is considered CO2-neutral. The electricity-based fuels are currently still in the development stage towards industrial production, but are already considered a long-term alternative to conventional paraffin or biogenic SAF, as they are theoretically to be produced without availability limits.

Atmosfair, a non-profit climate protection organisation based in Berlin, has built its own plant for the production of so-called “syncrude”. Syncrude is the alternative to fossil crude oil produced by means of power-to-liquid. This crude oil is then refined into finished Jet A1 fuel for aircraft at the Heide refinery north of Hamburg, fed into the refinery’s total volume and delivered to Hamburg Airport. This first industrial plant is so far unique in Germany. Regular operation is planned by atmosfair for the first quarter of 2022.