Norwegian is proud to announce that British author Jane Austen has taken to the skies as her portrait adorns the tail fin of a Norwegian Boeing 787 Dreamliner aircraft. The world-renowned author inspired generations with her best-known works including Sense & Sensibility, Pride & Prejudice and Emma. 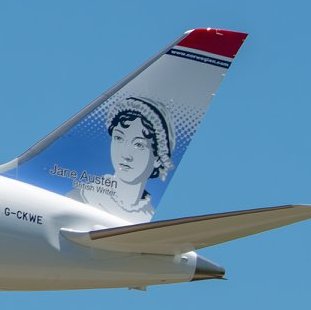 The Jane Austen tail fin Dreamliner aircraft operates Norwegian’s long-haul routes from London Gatwick including the airlines 12 nonstop routes to the USA and flights to Singapore and Buenos Aires.

Since Norwegian’s first aircraft took to the skies, the airline has always honoured iconic figures on the tails of its aircraft, using personalities who symbolise the spirit of Norwegian by pushing boundaries, challenging the norm and inspiring others.

Jane Austen, one of the world’s most famous authors, born on 16th December 1775, spent most of her life in the historic and beautiful county of Hampshire. Its houses, countryside and people provided the inspiration for many of her novels. It was during her time in the quiet village of Chawton that she wrote and revised six of her most famous novels – Sense & Sensibility, Pride & Prejudice and Northanger Abbey, and wrote Mansfield Park, Emma and Persuasion. It wasn’t until 1810 that her first novel Sense & Sensibility was accepted for publishing by Thomas Egerton.

Norwegian’s Chief Commercial Officer Thomas Ramdahl said: “As Norwegian continues its expansion in the UK, our ‘tail fin heroes’ offer us a perfect chance to pay tribute to some of the greatest Britons of all time. Jane Austen has inspired generations and it is a huge honour to have one of the greatest authors of all time adorn our aircraft.”

Europe’s third largest low-cost carrier flew 5.8 million passengers from the UK to over 50 global destinations. The airline has one of the youngest aircraft fleets in the world with an average age of 3.7 years, with more than 150 new aircraft on order. Norwegian has been awarded the ‘World’s best low-cost long-haul airline’ for four consecutive years at the SkyTrax World Airline Awards.