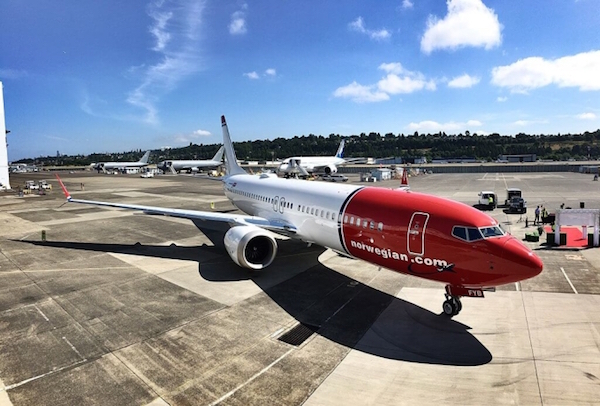 International Airlines Group (IAG) on April 12, 2018, acquired a 4.61% ownership position in budget carrier Norwegian Air Shuttle to initiate discussions with the airline, including the possibility of a full offer for Norwegian. A potential deal could value the carrier at $3 billion with debt, sources say.

“IAG considers Norwegian to be an attractive investment and has acquired a 4.61 per cent ownership position in Norwegian,” a statement from the company reads. “The minority investment is intended to establish a position from which to initiate discussions with Norwegian, including the possibility of a full offer for Norwegian.”

In a separate statement, Norwegian said it had no prior knowledge of the acquisition before it was reported by the media on April 12, 2018, and has not been in any discussions with IAG about the matter. Nevertheless, the airline said that “interest from one of the largest international aviation groups demonstrates the sustainability and potential of our business model and global growth“.

Shares of Norwegian soared as much as a record 50% on the day IAG announced it may offer to buy the company, and continued to rise on April 13, 2018, up 12.7% by 07:15 GMT, which is the highest level in 15 months, Reuters reports. A potential acquisition could value the company, which has a market value of more than $1 billion, at about $3 billion including debt, sources told Bloomberg.

Norwegian Air has disrupted Europe’s airline market with its incursion into low-cost long-haul flights. The Norwegian example has forced major industry players and legacy carriers like IAG’s British Airways, as well as rivals Lufthansa and Air France-KLM, to seek new measures and work on their own low-cost offerings.

Although budget carriers have had huge success in disrupting short-haul markets, the long-haul market, where costs among the legacy carriers are low, is a different game. On the other hand, some analysts believe it would be a challenge for carriers like British Airways to start low-cost long-haul operations due to legacy costs. Which is why IAG is particularly interested in Norwegian’s long-haul operations and the two could potentially be a good fit, The Financial Times writes.

Despite IAG already having its own budget airlines – Level and Aer Lingus, Norwegian remains a fierce competitor that poses a threat with its cheap intercontinental flights. The carrier is adding routes from Spain to Latin America, where IAG’s two other subsidiaries – Iberia and Vueling – operate. In addition, a large part of Norwegian’s long-haul operations are based at London Gatwick Airport (LGW), which is the main hub for British Airways.

The Scandinavian airline’s young aircraft fleet is another source of attraction. The carrier has one of the youngest fleets in the world with an average age of 3.6 years. It relies on the next-generation Boeing 787 Dreamliners to help keep fuel and maintenance costs low, along with 737 MAX, 737-800s and A320neos that can go farther than past generation narrow-bodies, therefore opening up new long-distance routes, Bloomberg explains.

But Norwegian has suffered deep losses with shares lagging behind its low-cost rivals like Ryanair and EasyJet. According to The Financial Times, the carrier suffered a $38.5 million loss in 2017, against a profit of $1.5 million a year earlier – its third year of losses in the last four. The carrier’s struggles, aside from deep losses, also include a $2.9 billion debt. IAG has taken advantage of Norwegian’s financial situation to make its move towards acquisition.

Will there be a full-scale acquisition?

IAG’s interest in buying the carrier may pave the way to the creation of one of the world’s largest airlines. But for now, the group has said in its statement that no discussions with Norwegian have taken place to date and “that it has taken no decision to make an offer at this time and that there is no certainty that any such decision will be made.”

Although IAG’s offer may be first of its kind, it remains unclear whether it is going to be followed through. Especially, after Norwegian’s CEO Bjorn Kjos denied intentions to sell his business, at least at the moment, in an interview in April, 2018.