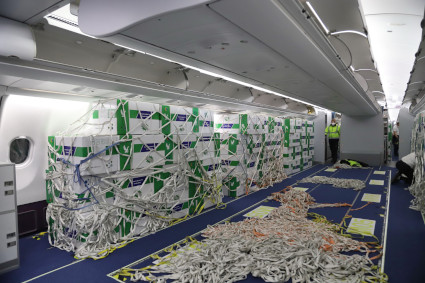 In recent weeks, Gebrüder Weiss has made a significant contribution to the fight against the COVID-19 pandemic. Using a chartered Airbus A330 specially converted for transport, the logistics company has been handling shipments of two to three million COVID-19 antigen tests per flight since the beginning of March. This project contract for a leading company in the medical trade was concluded for the time being with the latest flight from Shanghai to Linz on April 1. A Boeing 747 was chartered for this transport, which alone carried five of the urgently needed 14 million test kits from China to Austria

Usually, air freight shipments of goods are handled, to a large extent, via the hold of passenger aircraft. Since this option is no longer possible to the usual extent due to the COVID-19 pandemic and the resulting restrictions on air traffic, other solutions have been sought after for about a year. To meet the high demand for rapid tests, the company developed an air bridge consisting of five charter flights between China and Austria. After the aircraft had landed, several Gebrüder Weiss trucks ensured the smooth onward transport of the medical devices to their respective recipients. The majority of the cargo was destined for pharmaceutical wholesalers.