Qatar Airways is sponsor of the five-time European champions and the German football champions held their winter training in Doha for the tenth consecutive year. 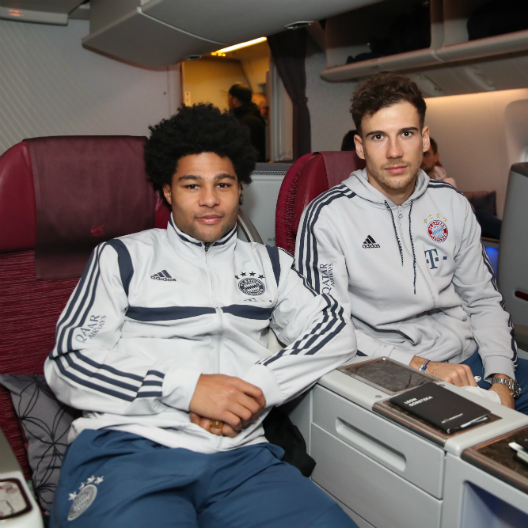 FC Bayern München men’s senior team spent last week in Qatar at their annual winter training camp. The German champions were based at the Aspire Academy in Doha from 4 to 10 January and utilised its world-class facilities in preparation for the remainder of the 2019-2020 season, when they will challenge for the Bundesliga title, DFB Cup and the UEFA Champions League.

Qatar Airways is a proud Platinum Sponsor of the five-time European champions whose stars include among others current French World Cup winners Benjamin Pavard, Corentin Tolisso and Lucas Hernandez, Germany’s world champions of 2014 Manuel Neuer, Thomas Müller and Jérôme Boateng as well as international top stars such as Philippe Coutinho, along with Robert Lewandowski who stars in the Qatar Airways in-flight safety video. The world’s number one airline became Platinum Sponsor of FC Bayern in 2018, securing a long-term partnership with the Bundesliga club, further adding to its impressive portfolio of global sport alliances.

Qatar Airways Group Chief Executive, His Excellency Mr. Akbar Al Baker, said: “Qatar Airways is delighted to have welcomed the most decorated German football club, FC Bayern München, to Doha. We are dedicated to being associated with top global names in football such as FC Bayern, who consistently demonstrate an ambition to be the best. The world-class sport facilities available here in Doha, coupled with the warm Qatar hospitality, make it the perfect winter destination for many top European football clubs.”

During the club’s visit, the airline invited children from the Qatar Cancer Society to meet the football stars on the sidelines of their training session. Additionally, two lucky, lifelong FC Bayern München fans from Germany were granted VIP access to meet the club’s players after winning an all-expenses paid trip to Doha courtesy of Qatar Airways.

On 20 January, Bayern München’s women’s senior team will also travel to Doha to start its winter preparation for the current campaign at Aspire Academy. Qatar Airways supports the women’s winter camp of FC Bayern, which will include social activities such as girls practise sessions delivered by FC Bayern coaches to promote grassroots sport.

Qatar Airways has been serving the people of Germany for over 20 years. The carrier now operates 35 weekly flights between Doha and Germany – double daily non-stop to Munich and Frankfurt – as well as daily non-stop to Berlin, providing onward connections to more than 95 destinations across the Middle East, Africa and Asia Pacific.