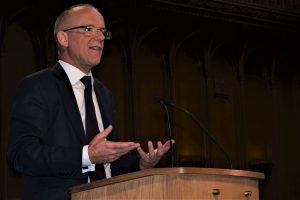 As Britain’s most senior anti-terror police officer, Rowley has served in the police for over three decades and is credited for working alongside intelligence services to foil 23 terror attacks in the UK since 2013, as well as doubling the number of arrests by counter terrorism officers in the last year.

His addition to the World Counter Terror Congress speaker programme is further evidence that the conference is the leading event for security professionals to learn about and discuss future operational strategy to respond to the global terrorist threat.

Rowley, who will retire in March, joins the most diverse speaker programme in the 10 years that SCTX has run, with counter terror leaders coming together from the most nations in the event’s history, including the UK, United States, Germany, Denmark, Sweden, Belgium, Norway, the Netherlands, EU and NATO all confirmed to speak.

Aligned with the UK’s CONTEST strategy and run in close correspondence with the UK’s Home Office, Cabinet Office and Emergency Services, the conference will deliberate best practice, highlight the importance of collaboration and provide updates on counter terror strategy, operations and policy, examining the key areas of Prevention, Pursuit and Protection. Attendees will also gain first-hand insights from the industry’s most renowned security experts, who work diligently to defeat the terrorist threats to our nations.

Speaking about the latest announcement, Richard Walton, UK Security Week Special Advisor and former Head of Counter Terrorism Command (SO15) at New Scotland Yard, said: “SCTX is the leading national event which is why so many leading figures want to attend and share their views. Bringing Mark Rowley as speaker will help nations around the world learn from his unique experiences in leading the UK response to the terrorist atrocities of 2017 so they can evolve their own strategies.”

The Security & Counter Terror Expo (SCTX) will run from 6-7 March 2018 and will also include a number of networking events. With more than 350 suppliers, 3,000 products on display and over 100 not-to-be missed conference sessions, SCTX will facilitate discussion on best-practice strategies to halt the advance of terrorism and showcase the latest products and technologies available to those tasked with protecting the public, business and nations.

For more information and to register for access to SCTX, the World Counter Terror Congress, Ambition, Forensics Europe Expo and The People Movement and Management Show, visit www.sctx.co.uk/registration and use guest code UKSW18.