Carrier wins awards in the UK and Portugal 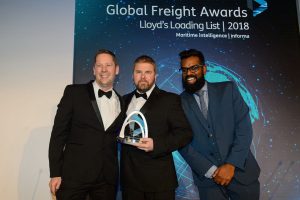 In a resounding validation of excellent air cargo services it offers to customers, Emirates SkyCargo won the Cargo Airline of the Year award at the Global Freight Awards ceremony organised by Lloyd’s Loading List, a renowned freight publication. The award was accepted by Ross Barnett, Emirates Cargo Manager, UK, at the gala dinner held on 16th November at the Royal Lancaster London in front of an audience drawn from the global freight and transport community.

The Global Freight Awards are held annually to recognise and reward innovation and achievement in the global freight industry and the award for the Air Cargo Carrier of the Year was finalised following a two-stage voting process open to the global readers of Lloyd’s Loading List.

The freight division of Emirates received the largest number of votes from the publication’s readership of freight forwarders and shippers for Air Cargo Carrier of the Year. This is a clear indication of positive customer sentiment towards Emirates SkyCargo as well as a strong measure of the successes of the carrier’s innovative and sector focused products and services. 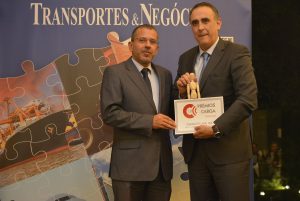 or the sixth consecutive year, Emirates SkyCargo won the award for the Best Cargo Airline- Middle East, Asia and Pacific 2018 at the awards hosted by Transportes e Negocios, a leading transport publication in Portugal. The air cargo carrier has been facilitating international trade between Portugal and the rest of the world since 2012 by transporting export commodities such as electronic equipment, automotive components, footwear, textiles and clothing from Lisbon in the belly hold of its now double daily Boeing 777 passenger service.

“Our recent award wins in the UK and Portugal are a confirmation that our ‘customer-first’ strategy is working. It is also an endorsement of the efforts invested by our team both in Dubai and around the world. We are truly honoured to receive this recognition from our customers and stakeholders in the market,” said Jeffrey Van Haeften, Emirates Vice President- Cargo Global Sales & Commercial- Europe.

Emirates SkyCargo works closely with its customers and supply chain partners to develop customised air freight solutions that respond to needs of specific industry verticals. The air cargo carrier has worked to establish new benchmarks in the global air freight industry with its suite of solutions such as Emirates Pharma, Emirates Fresh, Emirates Wheels, Emirates Pets and Emirates Equine.

The air cargo carrier operates a modern fleet of all wide-body aircraft including 256 passenger aircraft and 14 dedicated freighter aircraft. Emirates SkyCargo has invested in two state of the art hubs in Dubai – Emirates SkyCentral DXB for belly hold cargo from passenger aircraft and Emirates SkyCentral DWC for main deck cargo from freighter aircraft. The terminals also include extensive temperature controlled storage areas as well as GDP certified dedicated zones for the storage and transport of temperature-sensitive pharmaceutical shipments. Emirates SkyCargo is the world’s largest international cargo airline and in 2017/18 it transported a total of 2.6 million tonnes of cargo.