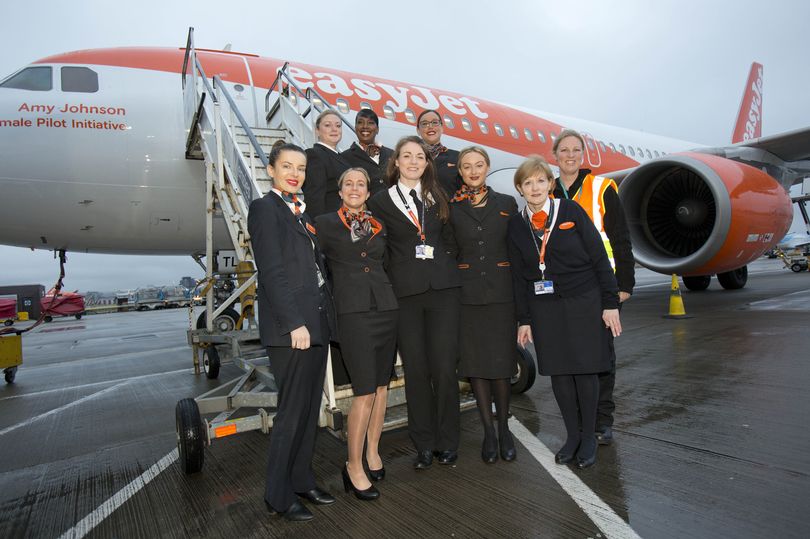 easyJet, Europe’s leading airline, is celebrating International Women’s Day with more female pilots flying on one day for the airline than ever before – also believed to be a European record for the most female pilots rostered by an airline in one day.

With over 100 female pilots on today’s roster, 60% of easyJet’s female flight crew have come out in force to take part in a campaign which is using the hashtag #SheFlies to raise awareness for the airline’s Amy Johnson Flying Initiative, a campaign by the airline to encourage more women to become pilots.

Today easyJet’s female pilots will fly from 24 bases in eight countries, to hundreds of destinations across the airline’s European network.

Women will be flying almost a quarter of today’s schedule meaning around 45,000 passengers will be flown by a female pilot today and in some cases, an all-female crew. Six all-female crews – which include a female Captain, First Officer and fourfemale cabin crew – will fly between London,Bologna, Rome, Milan, Munich, Barcelona, Amsterdam and Agadir.

Captain David Morgan, Director of Flight Operations at easyJet, has recently been named as an ‘Agent of Change’ by Management Today and the Women’s Business Council, for leading real transformation at easyJet and in the aviation industry through easyJet’s Amy Johnson Flying Initiative.

“easyJet is working hard to encourage more women to join this hugely rewarding profession and I believe that no other airline is doing more on this issue. Last week we announced a partnership with Girlguiding UK and the sponsorship of a new aviation badge to inspire young girls at an early age and our pilots have visited over 140 schools since launching the initiative to inspire the next generation of pilots.

“According to recent research conducted with our pilot community, a lack of female role models is a key reason that many girls and women do not consider a career as a pilot. Having our female pilots out in force on International Women’s Day will provide visibility of female pilots and hopefully inspire some girls and women to take up this rewarding career.

“At around 6% female pilots in total, easyJet is above the global average. We are working towards reaching our target of 20% of new entrant pilots to be female by 2020. In 2017 female new entrant co-pilot numbers were up by 48% year on year and so we are headed in the right direction – with days like International Women’s Day giving us an opportunity to encourage more to train as a pilot.”

“The good news is that there is a pipeline of female talent choosing rewarding career paths in the aviation sector. More can still be done, however, to encourage girls into what has traditionally been seen as a male-dominated area. Inspirational role models such as female pilots are key to influencing girls’ career choices. easyJet’s Amy Johnson Flying Initiative is an industry-leading example of tangible action to address gender parity. It is impressive to see easyJet joining many groups around the world to support International Women’s Day and #PressforProgress.”

“The number of female pilots is too low. We want to see more women flying, and are working with industry to encourage more women to take up challenging and rewarding careers in the cockpit and across aviation.

“Encouraging more girls to realise their potential is at the heart of the Government’s Year of Engineering campaign. We’re working with more than 1,000 partners, including easyjet, to bring young people face to face with engineering experiences and role models.

“easyJet is doing a brilliant job championing female pilots and by joining forces with Girlguiding to inspire budding pilots and engineers through the new aviation badge. We hope this will highlight the scale of opportunity in the industry for young women.”

“Having worked with easyJet in raising the profile of women in aviation the BWPA is delighted to see so many easyJet female pilots flying on International Women’s Day. The lack of visible role models is a key reason for the lack of female pilots in the industry, not ability, and we would be delighted if more airlines chose to engage with us in the way easyJet has to encourage women in to this rewarding career.

“All airlines need to widen their search and recruit ‘the best person for the job’ regardless of gender as easyJet has embraced.”

“One reason there are currently so few women pilots could be a lack of visible representation – so often we’re shown men as pilots. This could be sending a message to young girls that if they want to work in aviation, it can’t be as a pilot.

“That is why we’re pleased to see airlines such as easyJet taking a proactive stance on this with their Amy Johnson Initiative, as well as inspiring the younger generation through their partnership with Girlguiding.

“We believe the only thing that should matter in realising your dream and securing a job as a pilot should be your ability, not your background, financial situation or gender.”

Since launching the Initiative in 2015, easyJet pilots including many female pilots, have visited over 140 schools and colleges to raise the profile of the career.

Last week easyJet announced a partnership with Girlguiding which includes sponsoring the new Aviation badge for Brownies. 200,000 girls aged seven to 10 will have the opportunity to complete the badge which will engage girls in aviation, build a foundation for future study and raise awareness of the opportunities to become a pilot.The partnership will also extend easyJet’s pilot careers outreach work to a community of nearly half a million girls and young women aged between five and 25.

The current proportion of female pilots affects easyJet’s gender pay gap, which the airline has published for the third year running. easyJet has done this voluntarily since 2015 and is now reporting under the new UK gender pay gap requirements.

The overall gender pay gap figure at easyJet is heavily influenced by the gender imbalance in the pilot community at easyJet and across the commercial aviation industry as whole. Like all airlines pilots make up a large proportion of easyJet’s employees, they are paid more highly than other communities and, most materially, 94% of them are male. easyJet’s pilots salaries and other pay is collectively agreed and negotiated with the trade unions, which means that the pay rates are exactly the same for men and women.