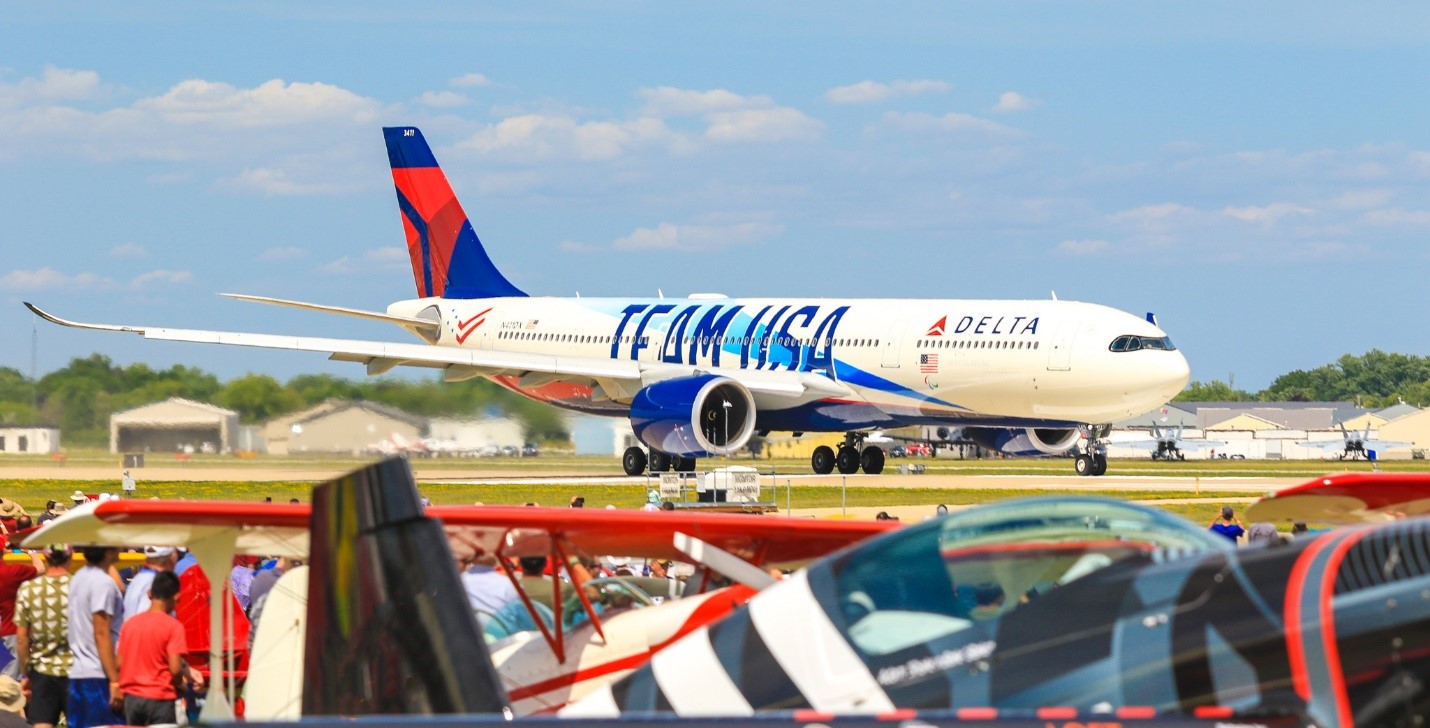 For the first time ever, a Delta jet touched down on the runway at Wittman Regional Airport in Oshkosh, Wisconsin, to take part in EAA AirVenture. The chartered Airbus A330-900neo, wearing a special Team USA livery, featured prominently both as a static display and in a flight demonstration during its brief 30-hour layover in Oshkosh.

AirVenture, a week-long festival hosted annually by the Experimental Aircraft Association, is often called the world’s largest aviation celebration. The event draws more than half a million pilots and aviation enthusiasts from around the world along with over 10,000 aircraft of various types and vintages.

Delta’s expanded participation in AirVenture this year was driven by employee feedback asking for greater brand presence at the annual event. Delta Ship 3411 arrived in Oshkosh the morning of Monday, July 25, following a brief charter flight from Detroit with several dozen employee volunteers who engaged with the public, promoted our brand and supported recruitment initiatives including the Delta Propel Pilot Career Pathway Program throughout the week. The following afternoon, Ship 3411 performed a brief flight demonstration for showgoers, featuring several passes over the airfield before immediately departing for a return to passenger service. 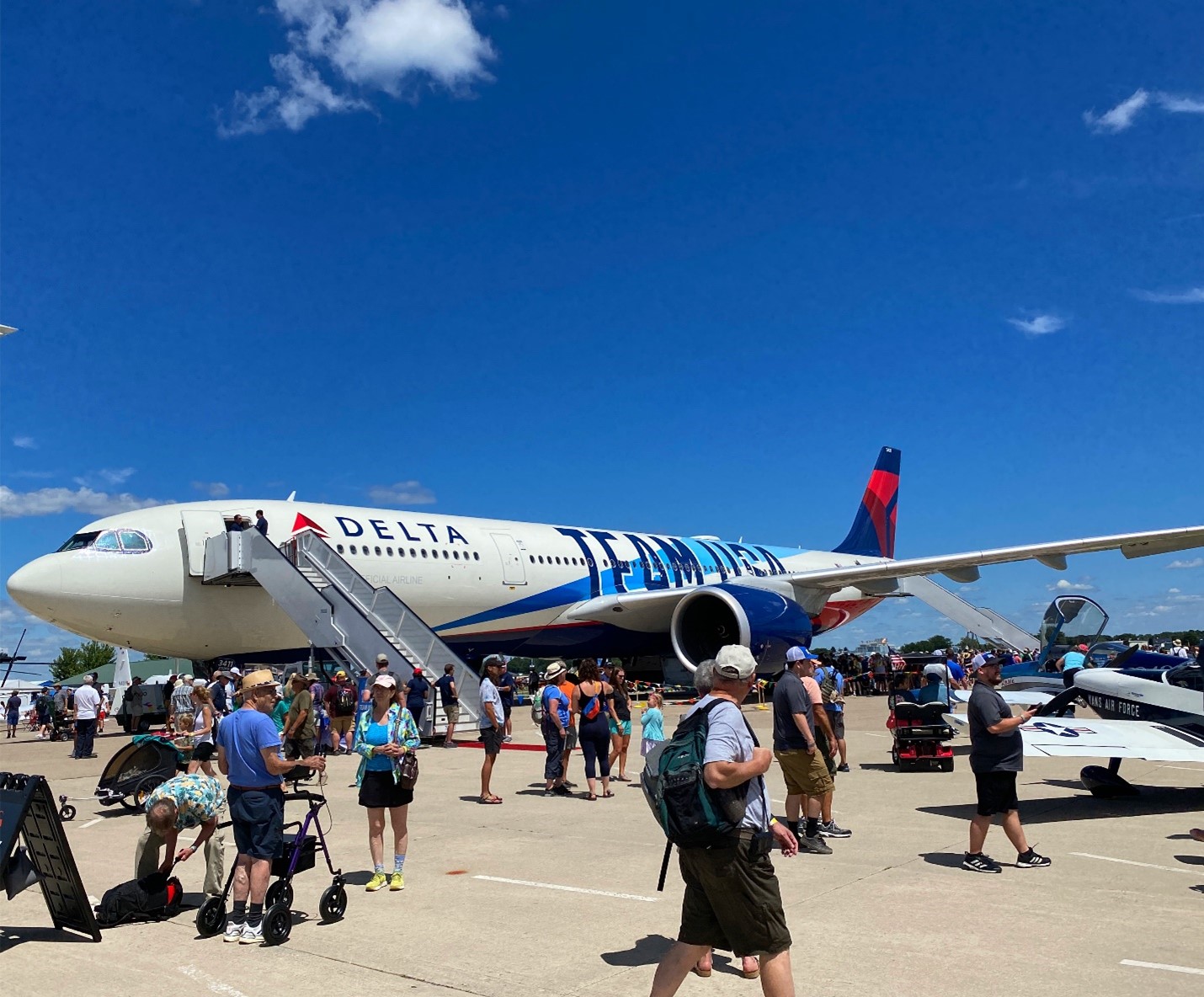 “In addition to the customer value, our presence here gives us a chance to talk with young people about Delta beyond the airplane, which is an attention-grabber, and about careers, future aspirations and powering the future,” said Patrick Burns, V.P. – Flight Operations and System Chief Pilot.

Ship 3411 garnered great interest and drew more than 4,000 visitors during the eight-hour period it was open t-o the public for tours, providing a golden opportunity for Delta people to share their passion for flying and inspire the next generation of aviators. 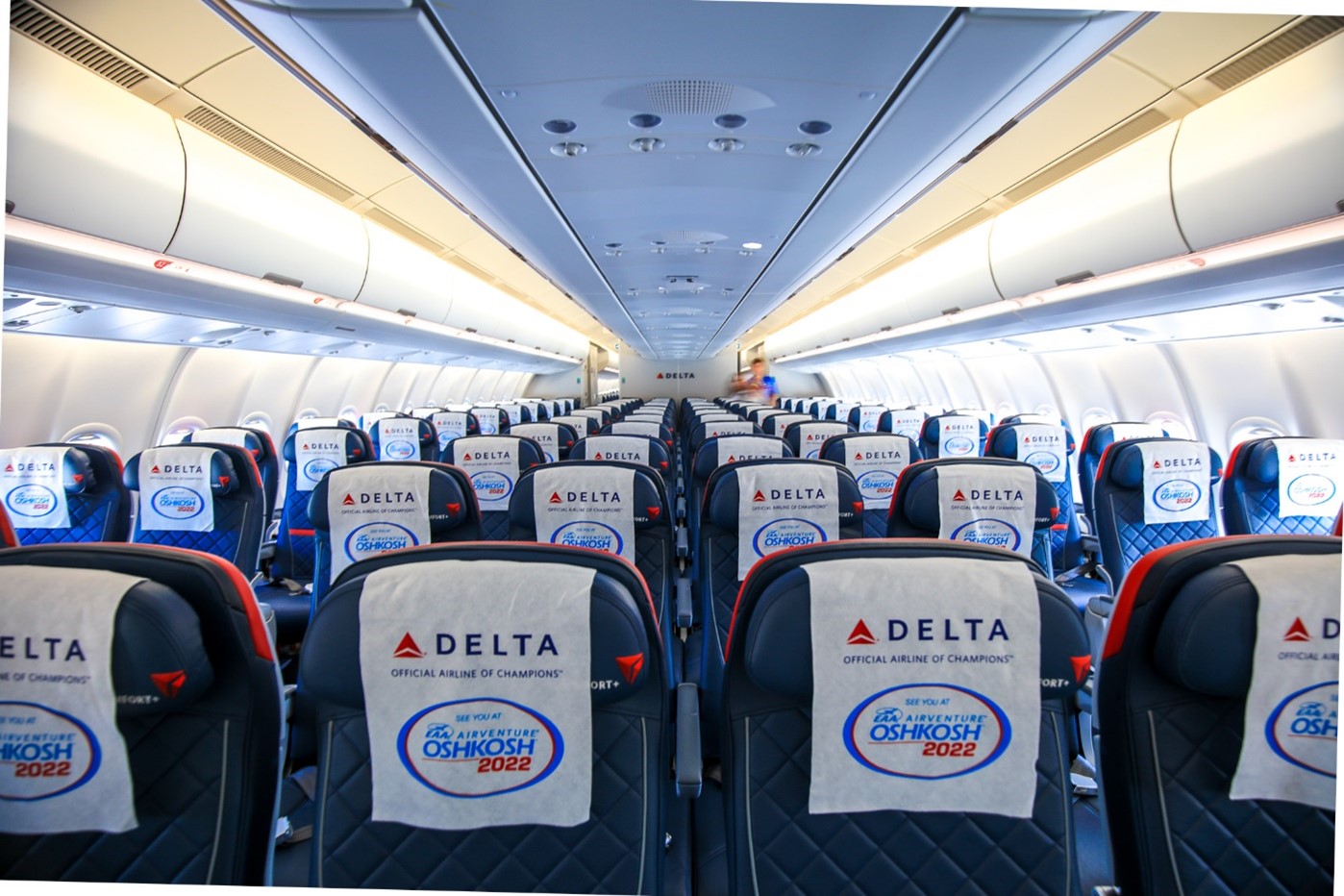 Among those who toured the state-of-the-art widebody jet included many current and former Delta employees who attend the event as fans of aviation along with aspiring pilots of all ages.

The walk-through tour of Ship 3411 gave guests access to the entire passenger cabin, including our new Delta Premium Select seating and our award-winning Delta One suites along with their refreshed amenity kits and bedding before culminating in a visit to the A330-900neo flight deck. Along the way, guests touring each cabin had the opportunity to engage with Delta pilots stationed throughout the aircraft.

Ship 3411 was delivered to Delta in May 2021 and is one of 15 A330-900neos in service with the airline. The aircraft was unveiled with its distinctive livery in December 2021 in celebration of Delta’s eight-year commitment to serve as the official airline of Team USA beginning with the Olympic & Paralympic Winter Games Beijing 2022. Delta will manage travel for Team USA through the Los Angeles 2028 Olympic and Paralympic Games.

Launched in 2018, the Delta Propel Career Path Program offers an accelerated path to the flight deck for selected students. Recently, Hampton University became the 13th school in the program, and the first historically Black college or university. Other schools include Inter American University of Puerto Rico, Auburn University, Kent State University and Embry-Riddle Aeronautical University campuses in Prescott, Arizona, and Pensacola, Florida. Through Propel, Delta was the first airline to offer students in accredited pilot programs a customized career path to a pilot role.