Qatar Airways, Official Airline of FIFA, delivered a special fly-by above all eight FIFA World Cup Qatar 2022™ stadiums with the iconic Winner’s Trophy and a special FIFA legend on board, as part of day-long festivities to mark one year until the much-awaited tournament.

The special Boeing 777 aircraft, painted with bespoke FIFA World Cup Qatar 2022™ livery took centre stage, carrying the Winner’s Trophy. Cafu, one of the most-capped players in Brazil’s history, a FIFA World Cup™ winner in 1994 and 2002 and a Qatar Legacy Ambassador was there to witness the fly-by and share the excitement of countdown to the iconic event. 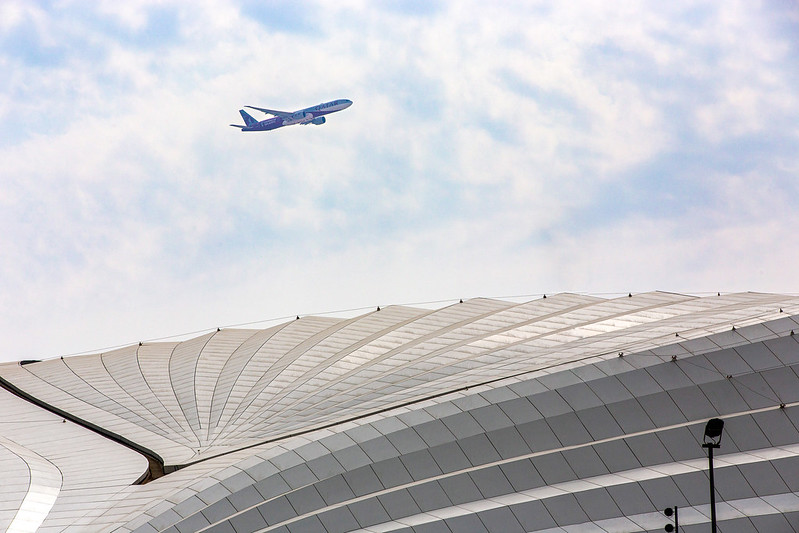 Qatar Airways Group Chief Executive, His Excellency Mr. Akbar Al Baker, said: “Qatar is ready to welcome fans from across the globe to its shores for this exciting, world-class event and, as the World’s Best Airline, we are eagerly anticipating the arrival of travelling fans on board as we expect amazing things from the FIFA World Cup Qatar 2022™. With just one year to go until the big event, the upcoming FIFA Arab Cup™ is the perfect showpiece tournament for both the State of Qatar and the airline to display our readiness. This global occasion represents what it means for us to be the Official Airline and Official Partner of FIFA, while seamlessly connecting people from around the world to our nation.”

With only 365 days until the much-anticipated event, Privilege Club, the Official Frequent Flyer Programme of the FIFA World Cup Qatar 2022™ is giving its valued members 3,650 bonus Qmiles for every booking made between 21-23 November 2021. With return flights becoming available for this world-class tournament on 10 December 2021, members are encouraged to stay tuned for a one-day unmatched Privilege Club member exclusive. To learn more, please visit https://www.qatarairways.com/en/offers/365.html.

As the first pan-Arab international tournament to be held under the FIFA umbrella, the FIFA Arab Cup™ will offer travellers a glimpse into the spirit of Qatar and the world-class stadiums set to host the FIFA World Cup Qatar 2022™. Stadiums that will host the FIFA Arab Cup™ include Al Bayt Stadium, Al Thumama Stadium, Ahmad Bin Ali Stadium, Stadium 974, Education City Stadium and Al Janoub Stadium. A detailed schedule of all matches and stadiums can be found online at https://www.fifa.com/tournaments/mens/arabcup/arabcup2021.

Qatar Airways sponsored the 2021 Concacaf Gold Cup and the UEFA Euro 2020™, and has an extensive global sports partnership portfolio that includes football-governing bodies such as FIFA, CONCACAF and CONMEBOL. As FIFA’s Official Partner, Qatar Airways has sponsored mega events including the 2019 and 2020 editions of the FIFA Club World Cup™, in addition to its sponsorship of the FIFA World Cup Qatar 2022™. Qatar Airways also sponsors some of the world’s biggest football clubs including Al Sadd SC, Boca Juniors, FC Bayern München, K.A.S. Eupen and Paris Saint-Germain.

The national carrier of the State of Qatar continues to rebuild its network, which currently stands at over 140 destinations. With more frequencies being added to key hubs, Qatar Airways offers unrivalled connectivity to passengers, making it easy for them to connect to a destination of their choice, seamlessly.

In addition to this, Qatar Airways is the first global airline in the world to achieve the prestigious 5-Star COVID-19 Airline Safety Rating by Skytrax. This follows the success of Hamad International Airport (HIA) as the first airport in the Middle East and Asia to be awarded a Skytrax 5-Star COVID-19 Airport Safety Rating. These awards provide assurance to passengers around the world that the airline’s health and safety standards are subject to the highest possible standards of professional, independent scrutiny and assessment. For full details of all the measures that have been implemented on board and at HIA, please visit qatarairways.com/safety.