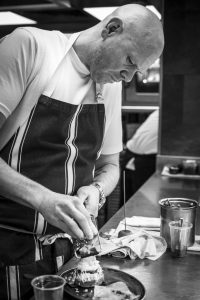 As part of its centenary celebrations, British Airways has teamed up with Michelin-starred British chef, Tom Kerridge, to design gourmet menus for customers travelling with the airline throughout August – the airline’s birthday month.

The new menus, which feature great British flavours, will be available in every cabin on all of the airline’s long-haul flights, providing customers with the option to enjoy a dish designed by Tom Kerridge for each course*.

The airline’s chefs and Tom Kerridge have worked closely to ensure the dishes not only showcase culinary expertise, but also work well at altitude.  The menu includes a variety of fresh seasonal ingredients, such as wild garlic and asparagus, with a focus on British provenance.

Carolina Martinoli, British Airways’ Director of Brand and Customer Experience, said: “Throughout our centenary year we’ve been celebrating with customers and thanking them for making us what we are today. As August is our birthday month, we wanted to do something to add a special touch to our customers’ journeys, and we think our partnership with Tom Kerridge will do just that.

“The dishes, which are available on all our long-haul flights, have been carefully created by Tom and his team to showcase the very best of Britain and give customers the opportunity to enjoy gourmet dishes at 35,000ft.”

Tom Kerridge, Michelin star chef, said “I’m so proud to be asked by British Airways, one of the most renowned and iconic British companies, to curate exciting on board menus for the month of August to celebrate their centenary. The dishes reflect not only my vision and what I do at my restaurants but most importantly, they represent the best of British food to the world.”

2019 is British Airways’ centenary year and the airline celebrates its birthday on August 25. From August 1, customers in Club World will receive a limited-edition wash bag from The White Company, while those in First can collect a special centenary amenity kit from Alice Temperley.

Mini-adventures travelling through Heathrow Terminal 5 and Gatwick over selected dates in July and August can pick up a limited-edition backpack by personalised children’s gift brand My 1st Years*. In addition, all young flyers during August will be given a special branded luggage tag and a pin badge in their Skyflyers Packs.

British Airways has released a series of centenary editions in partnership with British brands during its centenary. The airline has partnered with Scottish craft brewers, BrewDog, who created a transatlantic IPA for customers and Fife-based distillers, InchDairnie have created a limited-edition whisky. British Airways has also teamed up with Marmite, who have created a centenary branded jar and launched an English Sparkling Wine from Hampshire-based vineyard, Hattingley Valley.

* Customers travelling in World Traveller will be offered the choice of a Tom Kerridge main meal, that will accompany the normal seasonal starter and desert available that month.