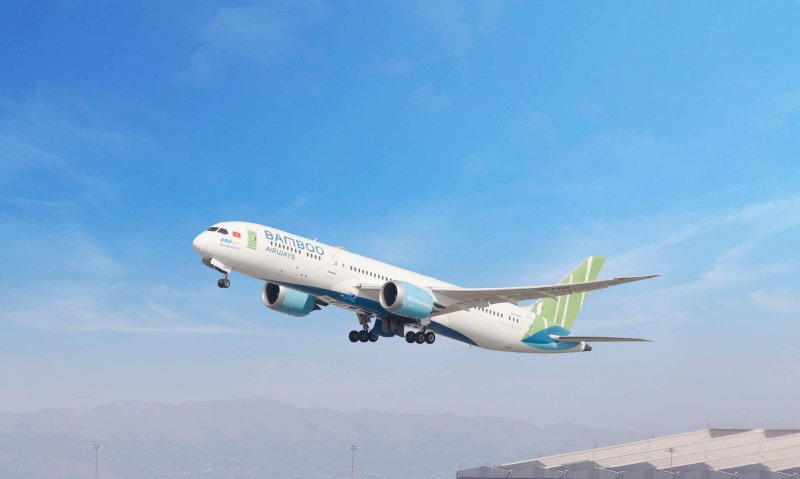 Bamboo Airways attended the demonstration flight of A220 aircraft performed by Airbus manufacturer, reflecting the airline’s great interest and relentless efforts in fortifying its current fleet and expanding network.

Airbus conducted a demo flight at Noi Bai International Airport unraveling its new single-aisle A220-300 with outstanding features in the presence of Bamboo Airways’ representatives on last May 6.

As the larger member of A220 family besides the shrunken version A220-100, A220-300 offers wide seats, modern clean-sheet interiors, large windows in every seat row, low noise levels, and spacious overhead compartments for up to 160 passengers; bringing about comfortable experiences as a wide-body aircraft.

With the specifically-designed Pratt & Whitney PurePower PW1500G geared turbofan engines, this new generation A220 delivers 25% lower fuel burn than the previous generation while providing an impressive range of 6,297 km, making it an efficient narrow-body aircraft for short and medium-haul flights.

Experiencing the A220-300, Bamboo Airways highly assesses its considerable flexibility in operating either domestic routes or new regional routes out of Asia – Pacific. With its advanced features, this new generation narrow-body aircraft can support carriers in optimizing the operational capacity, minimizing cost, and meeting different operational requirements.

“Bamboo Airways has actively worked with aircraft manufacturers worldwide to comprehensively research and consolidate our fleet in both quantity and quality, thereby providing our passengers with the most fulfilling flight experience on every journey”, said Bamboo Airways’ representative.

In an attempt to upgrade and fortify the fleet, the airline has cooperated with manufacturer partners to research new aircraft suitable for the network expansion plan while constantly seeking opportunities to experience and access potential models. Participation in demo flights is also within Bamboo Airways’ roadmap of constructing and promoting internal forces.

Last April, Bamboo Airways took part in the demo flight of Embraer E190-E2 TechShark in Hanoi demonstrated its fuel efficiency and capacity for short runways. As the torchbearer in operating and bringing Embraer into prosperous Vietnamese market, Bamboo Airways has grown its footprints on many special small-scaled routes in Vietnam such as Con Dao, Dien Bien, Rach Gia…

Earlier within the framework of the Singapore Airshow, Bamboo Airways entered initial works with Boeing and expressed interest in the latest fuel-efficient wide-body Boeing 777X to expand its presence in Europe, Australia, and especially the US.

Adding to its fleet expansion of quantity, Bamboo Airways has placed a great emphasis on ensuring the aircraft quality and cooperating with the international expertise partners in engine maintenance and technical support, thus ensuring a seamless and comprehensive operation. The airline has inked a serial Memorandum of Understandings on aircraft maintenance services worth millions of dollars with the world’s leading and prestigious MRO providers such as AFI KLM E&M and Lufthansa Technik last February.

As global aviation is bouncing back to the pre-pandemic level, Bamboo Airways has shown drastic actions to constantly upgrade and fortify its current fleet in response to the increasing travel demands, thus contributing to the economic development.

In the face of adversity posed by the unforeseen pandemic, Bamboo Airways has still made numerous milestones in building a diverse domestic network covering the S-shaped country, including services to difficult-to-access airports as well as pioneering routes that no Vietnamese airline has ever exploited. Besides ramping up services in the Asia region such as Japan, Korea, Singapore, and Thailand…, the airline also operates regular intercontinental flights connecting the two largest cities of Vietnam with Australia and Europe.