All Nippon Airways (ANA), Japan’s largest and 5-Star airline for eight consecutive years, is expanding its digital in-flight e-Library by adding 30 newspapers from across the globe to the ANA App.

ANA had stopped providing paper magazines and newspapers on board as part of its hygiene measures, however, like other items in the e-Library, the newspapers can be downloaded via the ANA App beginning 24 hours prior to the scheduled departure time of the flight, and the downloaded content can be viewed for up to 24 hours after the scheduled arrival time. In addition to offering in-flight entertainment options, passengers can also use the ANA App to make flight reservations, display boarding information and check for updated flight information.

“ANA is constantly looking for ways to leverage technology to improve the travel experience for our customers,” said Junko Yazawa, Senior Vice President, Customer Experience Management & Planning. “The decision to offer digital versions of prominent newspapers from across the globe will cut down on waste while offering passengers additional opportunities to engage with news and perspectives offered by papers that usually are not available in paper format.“

Types of newspaper: 5 Japanese papers and 25 foreign language papers from a total of 14 different countries. 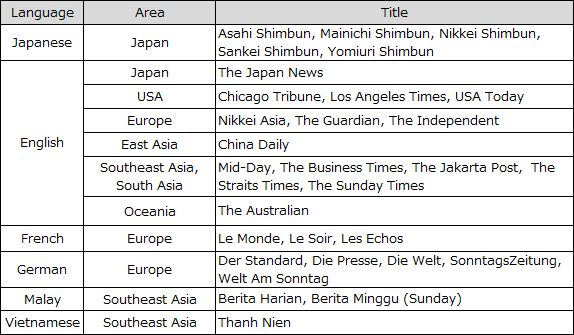 This effort will enhance convenience for passengers while reducing the airline’s carbon footprint. Digitizing ANA’s newspaper service will cut paper consumption by about 890 tons per year and contribute to the reduction of fuel use and CO2 emissions by reducing the weight of the aircraft.