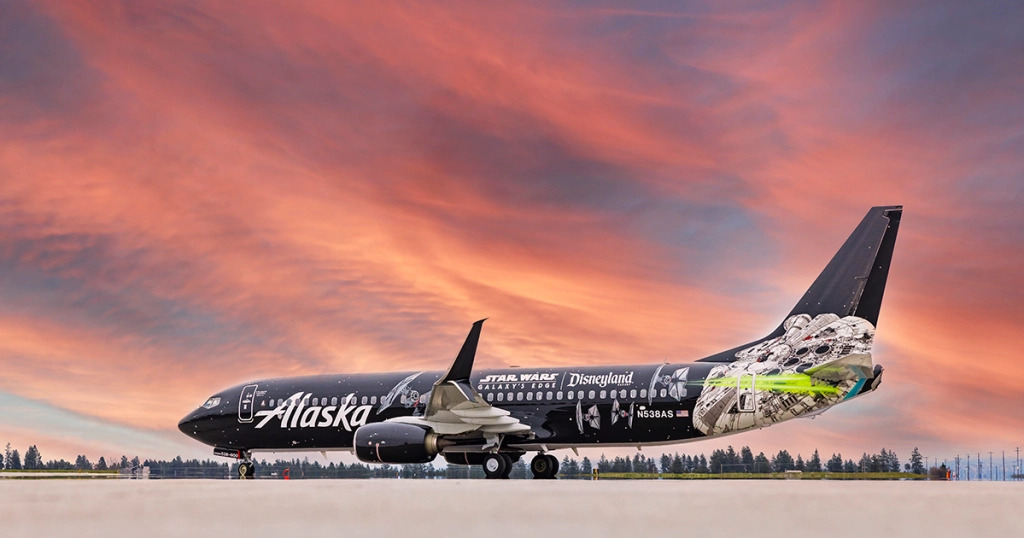 Alaska Airlines joined forces with Disneyland Resort yesterday, May the Fourth, to unveil a new, one-of-its-kind Star Wars-themed aircraft that even Chewbacca would be proud of!  The plane, painted space black with the iconic Millennium Falcon emblazoned on the tail chased by TIE fighters, celebrates Star Wars: Galaxy’s Edge, the newest land of adventure inside Disneyland park. The plane is now flying on routes across Alaska’s network for the universe to enjoy!

For this latest collaboration – Alaska’s seventh painted plane for the Disneyland Resort – no Jedi mind tricks were needed: the force was strong for a Star Wars livery to finally enter Alaska’s fleet. The aircraft’s official name is “Star Wars Transport to the Disneyland Resort” with a tail number of N538AS. After the big reveal and celebration at the gate in the Seattle-Tacoma International Airport, the plane made its inaugural flight today and ultimate arrival at John Wayne Airport in Orange County. 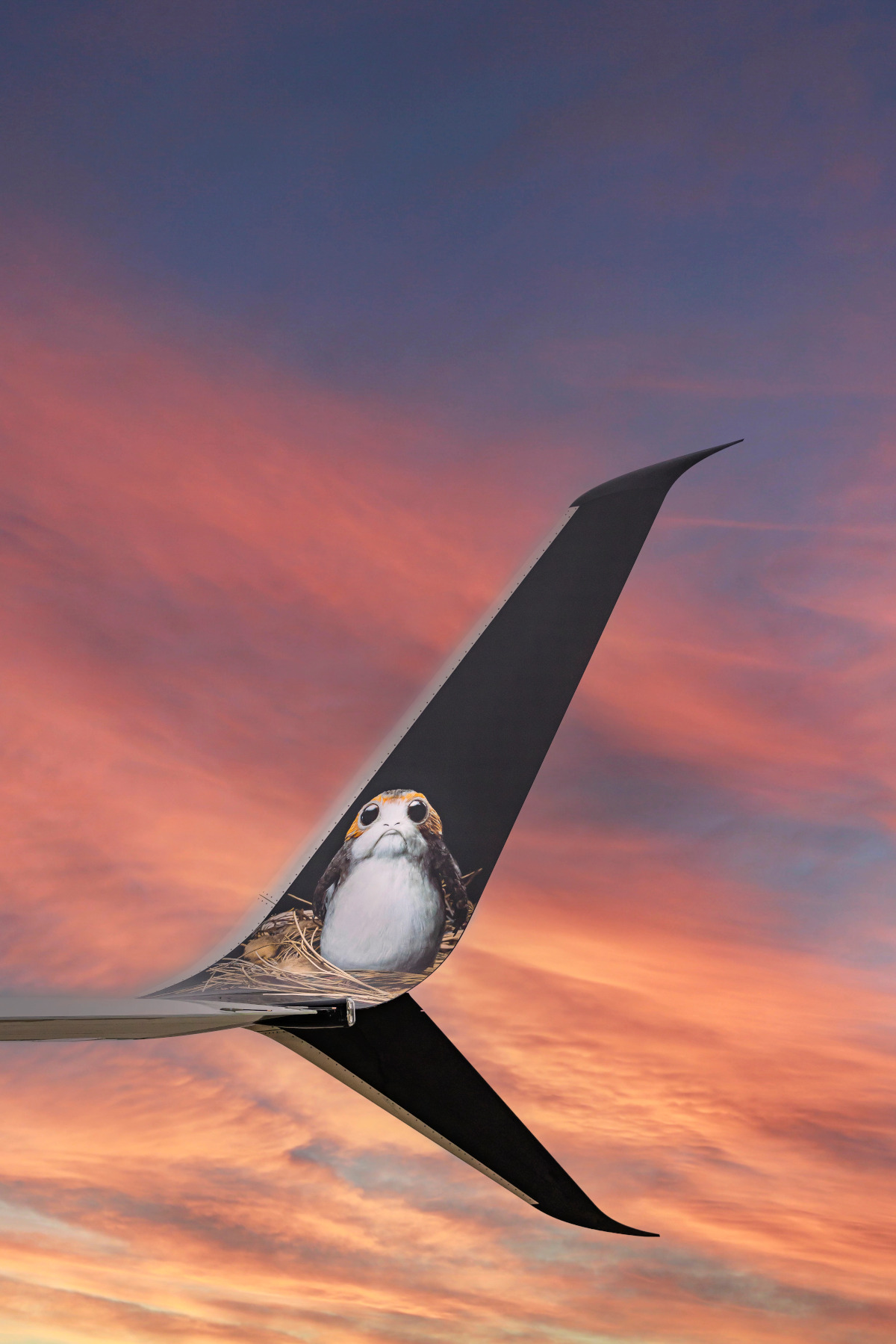 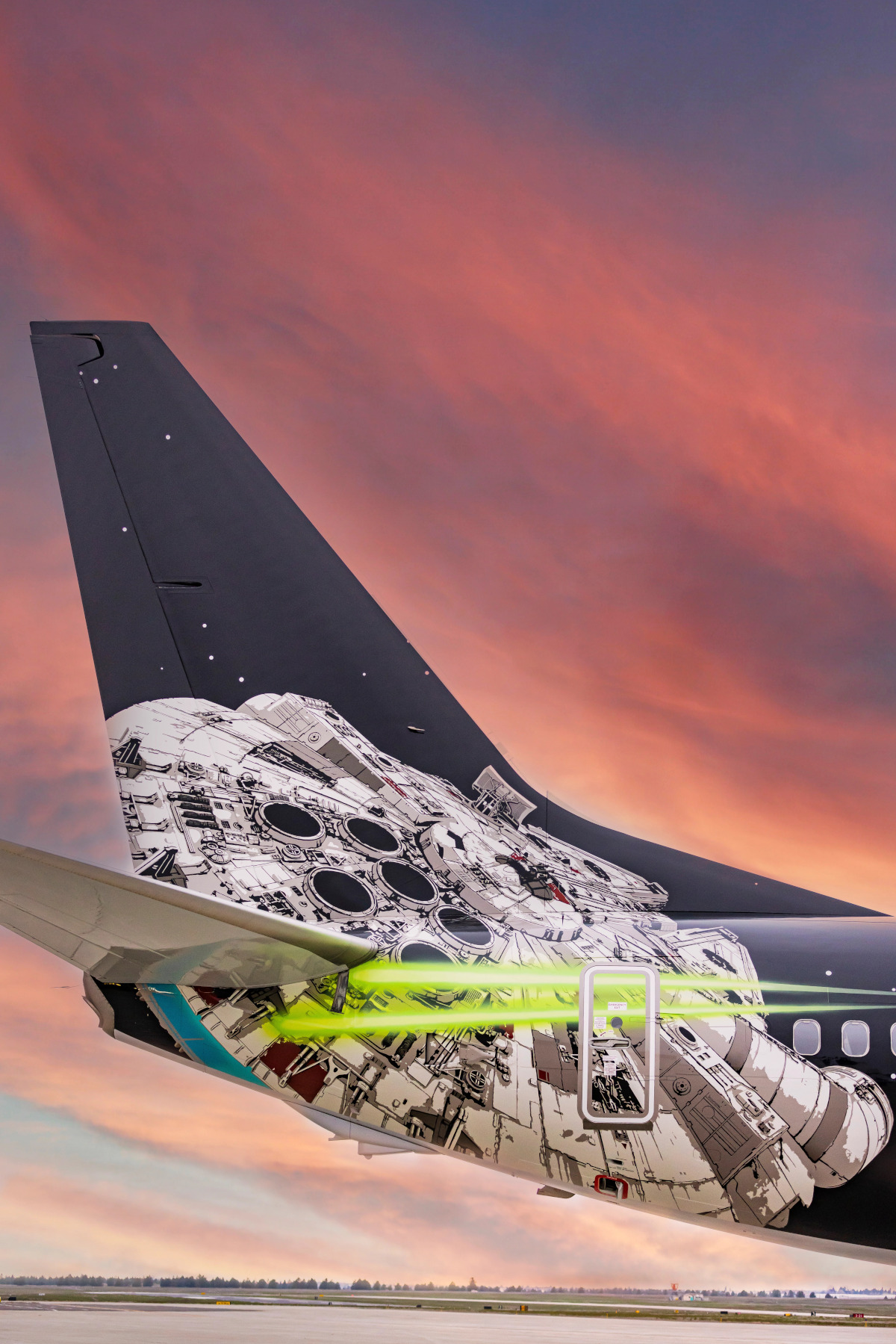 The unique design of the Star Wars-inspired plane is a collaboration among teams at Alaska, Disneyland Resort and Lucasfilm. Familiar spacecraft span each side of the plane with hand painted, detailed imagery: the Millennium Falcon and four TIE fighters. Designers at Disneyland Resort focused on the incredibly identifiable, widely recognized Millennium Falcon for the spotlight, in addition to the well-traveled spaceship being the focal point at Star Wars: Galaxy’s Edge, a 14-acre land in Disneyland park.

The Star Wars: Galaxy’s Edge and Disneyland Resort logos are featured in the center of the fuselage. For a lighthearted touch, porgs (the cute avian creatures that lived on Luke Skywalker’s remote island) look back at passengers from both winglets, as another porg greets guests at the boarding door.

“Star Wars Transport to Disneyland Resort” is scheduled to fly in the Alaska fleet and throughout Alaska’s network. You can also spot “Friendship and Beyond at Disneyland Resort” at airports and in the skies with a whimsical tribute to Pixar Pier at Disney California Adventure Park – our last Disneyland Resort-themed aircraft that began service in October 2019.